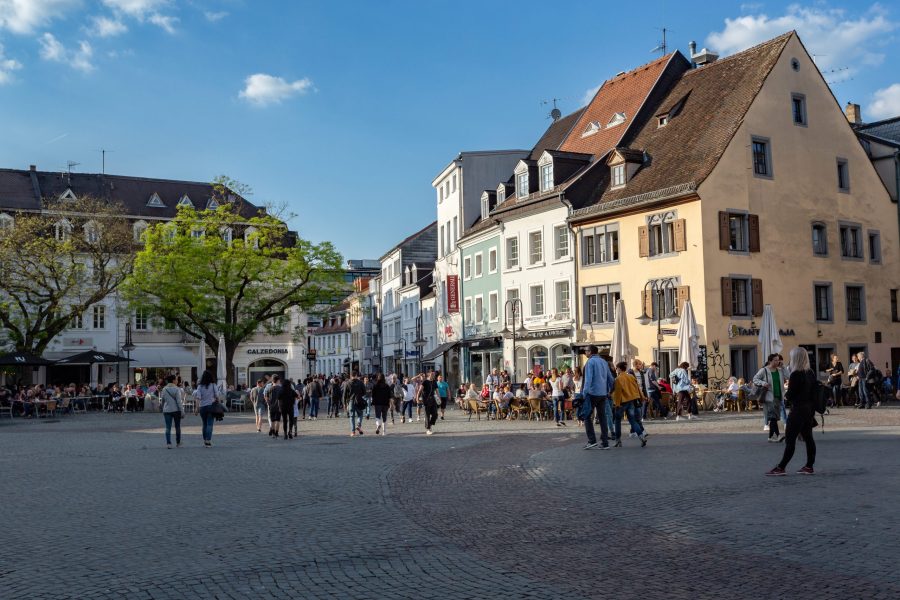 Summary: Uncover the traces of a unique urban planning project, combining the ideals of the Baroque with the ethos of Protestantism.

Contents hide
1 Should You Visit Saarbrücken?
2 The origin story
3 So what’s left
4 Anything other than churches?
5 Saarbrücken Opening Hours
6 Conclusion
7 Selected Bibliography
8 Image Credits
9 Explore the Area around Saarbrücken
10 Exploring the Saarland
11 Return to the Saarland
11.1 Saarland

Saarbrücken is not a top-tier tourist destination. It suffers from many of the ailments that befell most German cities in post-war period: random reconstruction efforts, active deconstruction efforts and an autobahn through the city center. However, the old Baroque center of St. Johann has been preserved along with fragments of the incredible protestant cityscape around the Ludwig-Church in old Saarbrücken. This guide will take you on a relaxed day-trip or perhaps a nice weekend while exploring the region.

If you are still undecided, my review of Saarbrücken as a destination in general can be found here:

Should You Visit Saarbrücken?

Saarbrücken cannot be honestly described as the gem of the Saarland, but it still has something to offer the passing traveler. Come and explore the unique Protestant cityscape and the charming old town of Saarbrücken.

The history of Saarbrücken extends far into the past, but the relevant history starts with the end of the Nine-Years-War and the Peace of Ryswick in 1697. By this point Saarbrücken had been at the center of European conflict for over a century, and had largely been reduced to a pile of rubble. With the return of the Nassau family, Saarbrücken would begin to emerge as a major city in the region.

Its worth mentioning here that today Saarbrücken refers to what were historically, two distinct towns. Saarbrücken was the capital of the County Nassau-Saarbrücken on the left bank of the Saar. On the right bank was the town of St. Johann. Starting under the reign of Prince William Henry of Nassau from 1741, the two towns would receive their current appearance (sans the modern construction). He would construct a shiny city upon a hill, with white washed houses and a truly protestant cityscape.

The creative genius behind the William’s image program was the architect Friedrich Joachim Stengel, who had served the extended Nassau family in various courts in the Rhineland. His contribution was a unique protestant baroque-rococo style, distinct from both the Catholic traditions of Balthazar Neumann and the Prussian Rococo. (Comparing Stengel to Neumann is probably unfair to Stengel) Saarbrücken would be a planned baroque city, in the style of Nantes, with the St. Ludwig’s church replacing the Ducal Palace as the center of the city.

Quite a lot more than most German’s would have you believe. If you ask the average person what their impression of Saarbrücken is, they would have you believe that the city exists as a sort of prostitution supercenter. While this is true, there is also the beautiful architecture of the old town to discuss.

On the Saarbrücken side, the reconstruction was focused on preserving the ‘reconstructed’ Palace square and the main axis to the reconstructed Ludwig’s church and surrounding buildings. Its only partially complete, but the parts that were completed are very well done. The other radiating streets are largely empty or lined with the western German equivalent of Soviet prefab housing.

At one axis is the palace, which is an abomination dedicated to post-modernism. Stengel’s palace had ceased to exist during the French revolution, but had persisted in some form until relatively recently. Miraculously, it had actually survived the war mostly intact, but it was decided in the late 1980s that instead of renovating the building, they would tear down the corps de logis and replace it with a post-modern monstrosity. This is easily one of the ugliest buildings humanity has ever conceived. I mean, I thought the point of post-modernity was to reflect on the building’s context. Stengel was a rococo architect, the strange deconstructed classicist cube has no connection with the original building.

The Ludwig’s Church and plaza on the other hand is one of the greatest examples of the post-war reconstruction effort in Europe. Someone correctly recognized that the urban concept created by Stengel extended beyond the church, and that rebuilding the church was not sufficient. Stengel had intended the plaza, and indeed the entire city, to be a Gesamtkunstwerk or a single piece of art. So instead of simply rebuilding a simplified church exterior, they went the extra mile, and rebuilt the entire plaza, and attended to even the smallest details and refitted the interior exactly as it once was.  I can’t actually stress enough how cool this is. Even in its fragmentary condition, the protestant cityscape of Saarbrücken is unique and is worth seeing.

St. Johann is effectively a nice German village, with beautiful market square and some charming side streets. The church of St. Johann was also designed by Stengel, but the interior is original, and indeed, one can see how it was supposed to be part of a larger cityscape and image program within the city.

The white houses are very unique to the immediate area around Saarbrücken and reflect the protestant and reformed ethos of simplicity and had the effect of turning Saarbrücken into a “Shining City upon a Hill”. There isn’t much left of this style, but there are a couple of streets in Zweibrücken (not worth visiting) with similar architecture.

The city itself had a lot of potential in the post war period, but the urban planners dismantled large sections of surviving old town to build the autobahn through the city center, also effectively removing the waterfront as a public space. I honestly don’t understand why they did this, it quite honestly ruined the center of Saarbrücken.

Anything other than churches?

Not really. There are a couple of museums, none of which are especially noteworthy for a general audience. One takes you through the remnants of the baroque fortification system which was dismantled in various stages. Although Germany has a low bar for interesting forts, this is still probably not worth your time. The second is housed within the old palace church. This museum shows mostly ecclesiastical and archeological artifacts without any context or coherency. I think this museum has potential if only they provided some meaning to their rather extensive collection.

For more detailed information about opening hours and accessibility check out this article here:

The logistics of trying to see everything can be a challenge, especially in a location is complicated opening times. Fortunately Saarbrücken is small and tourist friendly. Below I have summarized the opening hours for each of the accessible destinations in my guide.

A charming town with a longer, more interesting history than people realize. It’s a shame that so little of it’s heritage to the present day. Rather than seeing Saarbrücken for the sake of it, plan a visit to experience the beauty of the surrounding landscapes.

Explore the Area around Saarbrücken

Characterized by its rough landscape and way of life, the Saarland is full of things to explore. To the north there are the dense forests of Saar, and to the South the concrete Jungles of Völklingen. In Saarbrücken and elsewhere are the old-world cityscapes of these forgotten borderlands.