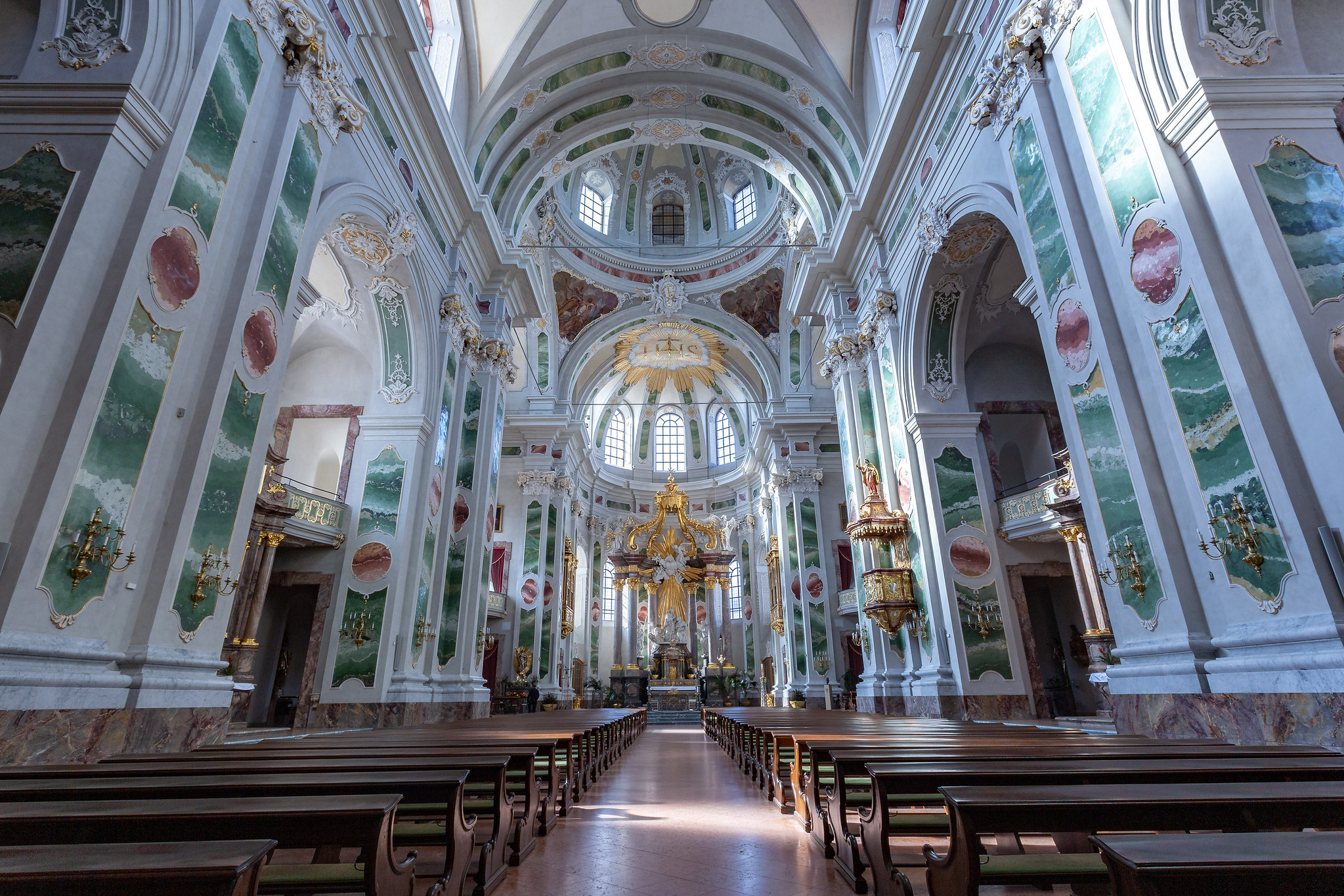 Summary: There is almost nothing to see here, but if you get stuck at the train station, why not look around a bit

Contents hide
1 Should You Visit Mannheim?
2 How to See Mannheim
3 The Mannheim Court
4 Architecture of the Machine Age
5 Mannheim Opening Hours
6 Traditional Foods of the Palatinate
7 Conclusion
8 Selected Bibliography
9 Image Credits
10 Explore the Region around Mannheim

The city of Mannheim was once the illustrious capital of the Upper-Rhine. From here ruled the Palatine Electors, the Dukes of Baden and the industrial barons of the German Empire. Of their legacy, virtually nothing survives. Nevertheless, since you might find yourself here having to change trains to go somewhere else, let me give you a quick tour of what’s left.

How to See Mannheim

Unlike the other cities of the Rhineland, Mannheim does not have a long history into the distant past. (If you are more interested in the ancient past I have an article with some itinerary guides for this portion of the Rhineland.) Sitting at the mouth of the Neckar River as it flows into the Rhine, there are traces of small settlements from the Roman period on-wards and evidence of a castle built here in the Middle Ages.

Mannheim emerges only after the destruction of the Palatinate in the Nine Years War in 1697. The catholic Elector Karl III Philipp was in need of a new capital when he was evicted in 1720 by the protestant inhabitants of the now ruined capital of Heidelberg. The city was built according to the urban planning ideas of the Baroque, heavily influenced by classical ideas and ease of administration. This is reflected in the rather modern-looking grid pattern, which contrasts it to other planned cities built with radiating avenues like Karlsruhe.

Prior to it’s destruction in WWII, Mannheim had a collection of buildings from two eras, the Baroque cityscape of the Palatinate and the architecture of the German industrial revolution, namely late historicist and art nouveau.

From this period in the city’s history, we have a number of scattered landmarks. The most impressive and worth visiting are the Electoral Palace and the Jesuit church, both located conveniently not too far from the station.

The Palace would end up being the second largest in Europe at the time of it’s completion in 1760. According to legend, the Elector demanded that it have exactly one more window than Versailles, to reflect his status as Elector. Though constructed in a late Baroque style, the design is heavily influenced by a number of traditions, especially French and Italian, the result of three different architects and 40 years of construction.

The Electors of the Palatinate were fond patrons of the art, especially music. Their patronage extended to most of the famous artists of the period, including Mozart. So influential was the court, that it retains its own place in history as the Mannheim School, featuring a number of musical innovations that would be published across Europe.

The Palace has been lovingly reconstructed since the 1960s and has largely returned to it’s historical appearance. While only one room survived destruction, several others including the Knight’s Hall and Grand Staircase have been rebuilt down to the last detail on the ceiling frescos originally by Egid Asam. The museum is worth your visit and won’t take up too much of your time.

Travel tip: The palace is open every day except Monday from 10:00 – 17:00. Its worth a brief stop over if you happen to already be in Mannheim

Before you leave the Palace, note the pavilion on the left side as you face away from the entrance. The palace chapel has also been restored, though not to it’s original configuration. It’s mostly representative of a church of the time, and worth a few minutes.

The next stop should be the Jesuit Church, which should be easily spotted with it’s massive dome and façade. The Elector was interested in enforcing the tenets of the Counter Reformation and invited the Jesuits as a symbol of Catholic power. The building was spared total annihilation and was reconstructed as it was, though without it’s lavish ceiling frescos.

The church was built in the style of the late Italian Baroque, generally copying the Church of the Gesu in Rome. The interior is an eclectic combination of influences reflecting, like with the palace, it’s long construction period and myriad of architects and artisans working on it.

Now if you are in a mood to walk, the last notable relic of the city’s origins is the town hall and old market square. This picturesque corner of Mannheim has most of it’s historical substance present in some form so it’s a tad atmospheric, but not really.

The town hall was the first building constructed following the French invasions, starting around 1707, and is stylistically distinct from the Palace and Jesuit church. The town hall was built to reflect the physical symmetry of the city and the theoretical symmetry of the church and state. On the right side is the church of St. Sebastian and on the left, the offices of the town.

The last thing worth noting are the other Baroque monuments scattered around the city, mostly in the form of statues and fountains. The biggest one is at Paradeplatz but the most scenic will be the statue of the four elements on the old market square. Originally meant for the palace gardens in Heidelberg it arrived in Mannheim in 1719.

Now if you are real bored and want to catch some glimpses of the illusive German art nouveau or see the closest Mannheim has to a preserved cityscape, the join me in the next section.

Architecture of the Machine Age

Late historicist architecture is bound up in the romantic movement and the consequences of a nascent national identity. The industrial revolution had brought substantial wealth to Germany and Mannheim and now it was time to replace the old buildings of an impoverished medieval state with something more representative of the future. This standardization also had the consequence of raising the standard of living, even for the working classes who were this given an additional incentive to join urban society.

The industrial wealth of Mannheim ensured that it had both the capital to reshape its cityscape and the power to draw new workers from the countryside. Much of what we see as beautiful “Victorian” or late historicist buildings are actually tenement homes for the working class. Much of the expense of the ornaments was about the prestige of the city and those financing it. The entire cityscape was once covered in buildings reflecting interpretations of past architecture applied to present design patterns.

Mannheim still has several neighborhoods of relatively middling and low quality historicist architecture, mostly tenement homes. The northern quadrants of the city have large proportions of preserved buildings, but the missing buildings or modernist replacements are frequent enough to distort the overall historical immersion. The Neckarstadt, on the opposite side of the river has the most intact cityscape in Mannheim and evokes the feeling of the late 19th century.

The most imposing monument to German historicism is the eclectic water tower (Wasserturm), built in 1885 in some sort of combination of the baroque and classical revival. It predated its direct surroundings by a number of years, and was subsequently surrounded by a beautiful art nouveau neighborhood and park.

Towards the end of the 19th century, artistic reactions against the industrial revolution and historical romanticism began to take form in various countries. Depending on where you look, the Art Nouveau emerges as either the last gasp of historicism as the style is taken to its logical extreme or its the first hint of the coming functionalist modernity. With its philosophical roots in the Arts and Crafts movement in Britain, it would been Belgium, France and later the German speaking lands that would see the most rich development of the style.

Considering that the Art Nouveau, or Jugendstil, is an urban-industrial style, its no surprise that Mannheim would have been a major center for its development. Considering the unimaginable losses that German architecture suffered in WWII, even the small collection of surviving monuments to the Art Nouveau in Mannheim is one of Germany’s best, especially given the high quality of buildings and sculpture. Even beyond the immediate surroundings of the water tower you will find all manner of facades from this period.

The few destinations of note in Mannheim have fairly convenient opening hours:

In addition, there are a few other smaller museums in Mannheim that might be of special interest, such as the Schiller House and the Reiss-Engelhorn Art/History Museum.

Mannheim has a number of very nicely reconstructed buildings. However, these don’t make up for the catastrophic losses in WWII and in the later decades of the 20th century. If you have already seen all the other palaces in Europe, I could make a case for Mannheim, otherwise get on that train to Heidelberg.

Explore the Region around Mannheim