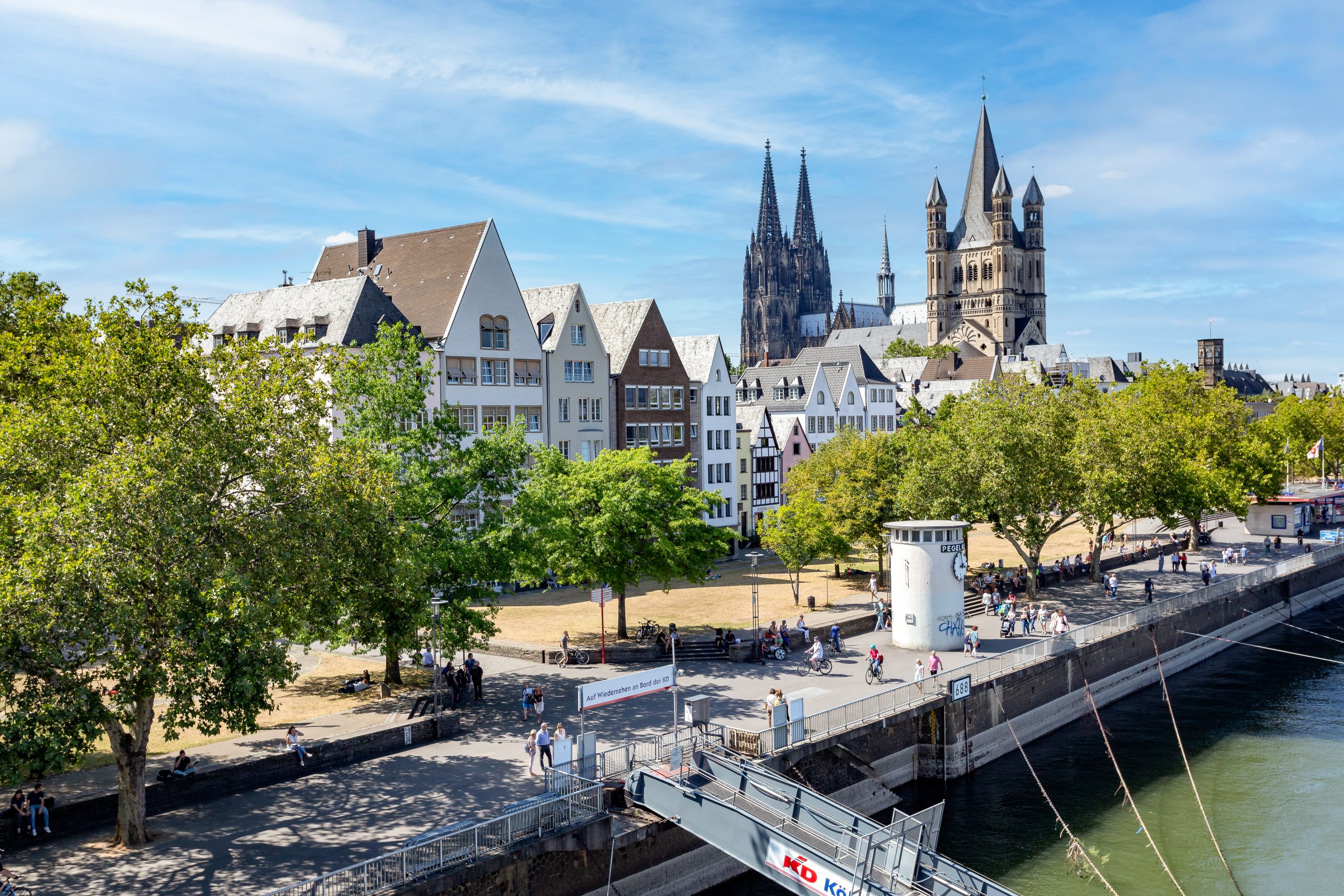 Summary: Don’t go here unless you like churches or obscure German beer.

Contents hide
1 A lost heritage
1.1 To rebuild or not to rebuild?
1.2 A global tourist attraction
1.3 A glimpse into a forgotten past
1.4 Cologne Opening Hours
1.5 In conclusion
1.6 Selected Bibliography
1.7 Image Credits
1.8 Explore the Area around Cologne
1.9 Exploring the Lower Rhine Valley
1.10 Return to the Lower-Rhine
1.10.1 Lower-Rhine Valley

The ancient city of Cologne was, from its foundation by the Roman Empire until the high medieval period, perhaps largest and most important city within the borders of modern day Germany. It is noteworthy today for being one of the ugliest cities in Europe and possessing virtually nothing of value to the average tourist. That it consistently appears on tourist itineraries is possibly the biggest joke in European travel. Nevertheless I will guide you through what’s left of the great city of Cologne.

Let’s start with the obvious, why is Cologne so ugly? On paper the city should have a rich collection of architecture from across the various periods of European history. However, this architectural heritage suffered greatly three times in modern history, first at the hands of Prussian urban planners, then from allied terror bombing, and then again from post-war German urban planning.

After the city became Prussian following the Congress of Vienna in 1815, the population would started to grow, and with the industrialization of the Rhineland, by the end of the 19th century, the population exploded. Urban planners during this period sought to renew the cityscape and increase living standards. Most of the medieval center would disappear during this period, along with most of the city’s small parish churches. The large churches then took the place of the parish churches, often with substantial renovation.

As such, by the time the first allied bombs fell, the city was defined more by its 19th and 20th century avenues, rather than by its medieval heritage. When compared with prewar Frankfurt or prewar Nuremberg this is made all the more evident. As with both of those cities, Cologne was utterly devastated by the war, and the options for reconstruction were limited, and the modern planners opted for Tabula Rasa, or for a clean slate.

So this brings us to today, it should be obvious that even in an optimistic scenario, there would be very little worth seeing. If you must see Cologne, I would recommend using it as a base to see the rest of the Lower Rhine Valley. With architecture, we have to differentiate between individual buildings and the overall context. So for this guide, keep in mind that there will be a lot of walking.

To rebuild or not to rebuild?

Cologne in particular, made no effort with the reconstruction of the historical center. Elsewhere in Germany, historical reconstruction took several forms. The most common strategy was to preserve individual buildings where possible and to create “cultural corners” with gaps filled by highly stylized modern architecture. Almost every German city preserved or reconstructed a few corners of the city to preserve a sense of pre-war visual context. These corners vary in quality, but are typically comprised of multiple buildings and extend beyond just a single monument. In Cologne, this guide points to five locations of poor quality that fall into this reconstruction paradigm.

The Tabula Rasa approach is all too common with German cities, typically the historical plan is abandoned entirely and the cities is built on a modern grid. The success of this approach varies from the abysmal, e.g. Cologne, to relatively successful, e.g. Stuttgart. One of the problems with this strategy is the question of major historical landmarks. Lacking in a coherent strategy, the result tends to be totally random. In the case of Cologne, the 12 Romanesque churches in Cologne were all, almost without exception destroyed to the foundation. However, their reconstruction was deemed important enough to start, but while it was finished with some, with others it appears to have been a joke. Some houses were reconstructed, or had their facade preserved, like the spectacular Romanesque Overstolzenhaus, but other, probably more interesting buildings like the Town Hall were not.

Finally, as was the fate of many German cities in the post-war period, there was the decision to build an autobahn through the city center. Indeed, Cologne was especially hard hit by the decision to widen roads and increase road traffic. The city is in many parts simply not navigable on foot, and taken as a whole, is probably the worst example of urban planning in Germany.

Which brings us back to the main point, why then would you ever go here?

And this is a good question, why would you go here? And the answer is you probably shouldn’t. But since there is a little to see here, lets talk about what there is to do.

For starters, in Cologne you are only two hours by train from Brussels, if Chocolate is your thing, go there. The chocolate will be better. The museum of Roman archaeology is probably one of the best in Germany, but its not the only one. Both the Pergamont in Berlin and the Landesmuseum in Trier offer comparable collections in more interesting cities. Its also nothing compared to the collections housed in London or Rome.

Kölsch, the local tipple, is kind of a cool experience. The beer style gets its name from the city, and is only really found in Cologne. There are a number of major and minor breweries across the city, many with distinctive flavors that offer more than a generic German pils.

The cathedral is, however, worth seeing, but a trip to virtually any second-tier French city will yield an experience of similar magnitude. Less survived in the Cologne cathedral than popular legend will have you believe. If you want to see towering gothic spires, then France is a better destination.

A glimpse into a forgotten past

If you are interested in church architecture in more depth, Cologne is probably one of the best destinations in Germany. The Cathedral represents a critical moment in German architectural history, as the definitive end of the Romanesque. But the 12 Romanesque churches offer glimpses into a different architectural history, and are critical to understanding trends in Rhenish architecture and the development of the Staufen architectural image program. Some, like St. Gereon, St. Maria Himmelfahrt and St. Andreas are probably among the most beautiful churches in Europe. It’s a shame then, that some of the most important monuments, such as St. Maria im Kapitol, were only partially reconstructed and did not receive more than a simple renovation.

If you are interested in this side of Cologne, I have a much more detailed itinerary planned out here, and I plan to write a short guide to each of Cologne’s churches in more detail.

For more detail on opening times and accessibility check out this table here:

Cologne is an absolutely massive city to walk across and its probably not advisable to try and see every single church on a single walking tour. Below is a list of opening hours for the main destinations that I mention in the guide

If none of that sounded interesting to you, then neither should Cologne.

Explore the Area around Cologne

Exploring the Lower Rhine area can be disheartening due to the difficulty of finding any prewar heritage that survived WWII. This guide will seek to highlight the architectural heritage that remains.

One thought on “Travel Guide to Cologne”