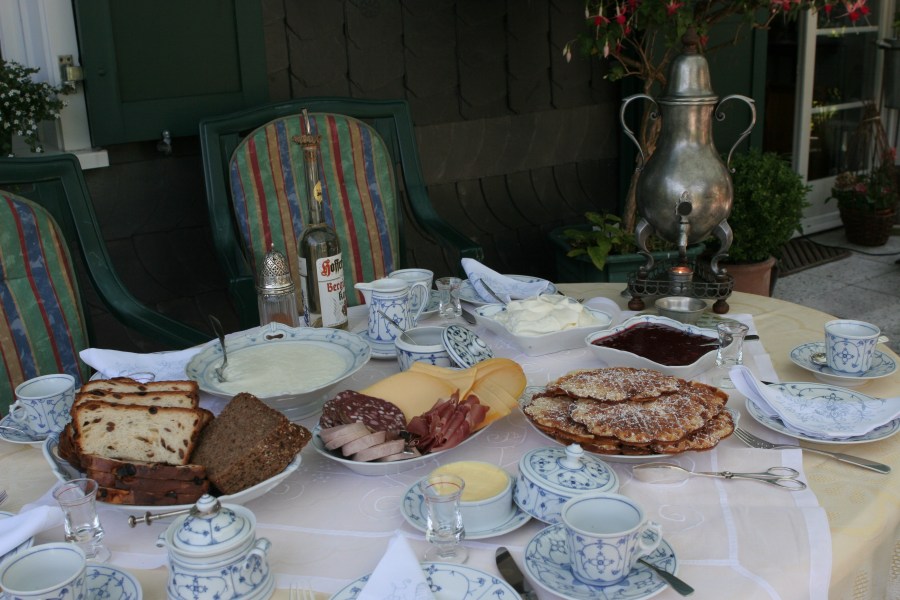 The highlands above the right bank of the Rhine are not well suited for agriculture. Dominated by dense woodlands and rocky crags, the region was also prone to flooding and was difficult to till. The bounty of this land was to be found under the earth. However, digging iron from the mines and working it into steel was a difficult life, one that needed a lot of calories to maintain. So the people of Berg developed a diet rich in protein and along the way came into their own culinary traditions. Here I outline some of the most traditional things you can eat in this part of Germany.

In German, it’s called the Bergischer Coffee-Table. It refers to a sort of “coffee ceremony” popular in the rural territories of County Berg. It originated in the 17th century, probably not with real coffee, which arrived only in the following century. Coffee is served in an elaborate carafe and is surrounded by local charcuterie, lots of rye bread with butter and jam. It was described as being a centerpiece of local feast-day culture in the region and largely faded away during the post-war famine period. Today you can enjoy it at many restaurants and hotels in the region. It has several distinctive components:

Perhaps the most unique item on the table is the Dröppelmina, a coffee carafe designed to brew and dispense coffee before the invention of the coffee filter. The name comes from a portmanteau of the Bergisch word for “Drops” and “Wilhelmina” which roughly translates to the “Servant’s Carafe”. Originally quite small, the Dröppelmina moved increasingly towards the centerpiece of the table and became larger and more elaborate over time.

The Bergisches Land enjoys one of Germany’s few localized traditions of waffle making. Unlike in Belgium, where every city has its own variant, waffle making is for the most part considered a foreign import. However, here sweet waffles with cream, jam, or fruit butter have been served since at least the 19th century.

Panhas is a local sausage specialty of the Bergisches Land and the Ruhr Valley. The most noteworthy attribute is the incorporation of buckwheat or other whole grains into the mash. It’s a peasant dish associated with the annual pig harvest. Typically after the high-quality meats have been used up, the remaining broth and leftover meats would be cooked with fat and gelatin mixed with whole grains. When cool, the sausage is finished but is typically cooked again before eating.

Otherwise known as toast, Zwieback is just old bread that has been baked a second time, as the world is literally “Second Bake”. All of the sources seem to indicate that Bergisches Toast is in some way special or unique without further elaboration. No better way than to check for yourself though.

For a traditional main course, we have something more in line with what you might expect from Germany. This is Krüstchen, which in the traditions of Berg, it’s a baked schnitzel on a piece of rye bread with a fried egg on top. It is essentially an open-faced schnitzel sandwich with egg. Typically it’s served with french fries. It is actually quite fantastic and is probably the region’s best export to the rest of Germany.

A Pillekuche is a potato pancake made with grated potato, egg, and flour. It’s usually spiced with nutmeg salt and pepper. It is similar to the potato dishes of the Sauerland and Westerwald, but rather than baking in the oven, it’s fried in the pan like a pancake.