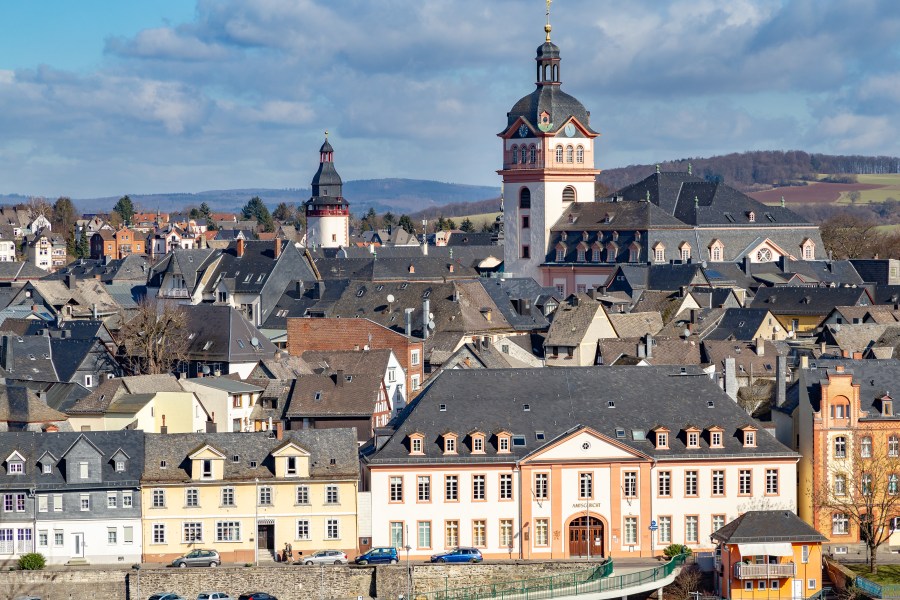 If you wanted the quick Westerwald Experience, there is a definite answer to the question of “What should I see first?”. With these three destinations, you will have experienced a bit of everything that the Westerwald has to offer.

3. The Free Imperial City of Wetzlar

The Free and Imperial City of Wetzlar is one of the more interesting relics of the old Holy Roman Empire. After Louis XIV burned much of the Palatinate to the ground in the War of the Palatine Succession, the old Imperial Court of Appeals in Speyer found itself a smoldering ruin. The court was subsequently moved to the small village of Wetzlar, and the court would adjudicate disputes between states of the Holy Roman Empire until its dissolution in 1804. This ensured that this small town maintained a wealthy middle class of judges, lawyers, and lobbyists, and this wealth is still evident today in the town’s rich architectural history.

The town has a rich collection of well preserved half-timbered houses and middle-class homes from the 18th and 19th centuries. This also includes the interiors in several cases, such as museums in the Jerusalem House, the Lotte House, and the Palace Papius. The last one hosts the Lemmers-Danforth collection of historical furniture, one of the best documented in Germany.

The town misses out on the top spot due to damage suffered in World War II, but there is enough to see and experience to comfortably fill a relaxed afternoon.

Weilburg is one of the ancestral capitals of the Nassau Dynasty and the best-preserved Renaissance and Baroque residence in the Westerwald. The first evidence of permanent settlement is a monastic settlement from the early to high middle ages. Remnants of this can still be seen in a small Romanesque chapel on the outskirts. However, development into a major settlement started only after 1355 when the Nassau family moved their capital here.

The main highlight of Weilburg is the spectacular Renaissance and Baroque palace, which was developed out of the medieval palace in 1535, and hosted the Nassau family until the 20th century. The palace is one of the best-preserved of its type in Germany and is worth visiting in its own right. As a proper residence and capital, the palace includes a large garden complex with beautiful views. It sits alongside the commanding presence of the palace church.

The town itself is also remarkable for its location on a horseshoe bend in the Lahn river, which makes for beautiful views of the city from the surrounding heights. However, it’s not just the city above the river worth visiting. Made wealthy in the 19th century by its mineral wealth, the town even has a mine directly below the city hall, which can be visited on a museum tour.

This mineral wealth was once shipped out on barges to the Rhine via one of Europe’s only boat tunnels which travel under the city to bypass the old mills. You can experience this via a canoe rented from the waterfront. You will find yourself paddling through a dark tunnel followed by hand-operated locks.

1. The Ancient walls of Limburg an der Lahn

The most remarkable monument to this early period of Holy Roman settlement is the town of Limburg on the Lahn, which even today remains one of the best-preserved fully medieval old towns in Germany. Though ruled by a cadet branch of the Isenburg Family, the town itself was nominally controlled by the Holy Roman Emperor himself.

Much of the city’s wealth came from the tolls it exercised on, what was for many centuries, the only stone bridge over the river Lahn. The town levied these tolls in some form until the end of the German Empire in 1918. Today, the small old town possesses some of the best-preserved medieval streets and squares in Germany. The old Fish Market, for example, is surrounded entirely by buildings dating to the 13th century.

Though small, the old town of Limburg offers one of the most immersive medieval environments in Germany. The town has not yet been conquered by mass tourism and is still inhabited and well maintained. A feat made more impressive by how easily it can be reached from Frankfurt main station. The highlight of the town is its spectacular Cathedral, modeled almost directly off of the Northern French Cathedral of Laon. The Church in Limburg itself comes with both a nearly intact set of medieval frescos and a collection of medieval relics and treasures spared destruction over the centuries.

The UNESCO Baths of Bad Ems

By far the best example of the Nassau family’s prestige is the Spa town of Bad Ems. Already a favorite destination of the Holy Roman elite, it also became a favored destination of the Prussian King, and later German Emperor Kaiser Wilhelm I. It was from here that the Kaiser sent the famous Ems Telegram, starting the Franco-Prussian War.

Though also briefly a Nassau residence, the Herborn itself was never a major seat of power. It saw its heyday in the 19th century as a mining boomtown much like Dillenburg and Siegen just to the north. However, unlike both of those towns, today offers a nearly fully preserved old town of half-timbered houses and alleyways.

The Westerwald is a beautiful region full of small villages of Half-timbered houses and soaring medieval cathedrals. What it lacks in urban scale it makes up for in immersion into the historical context that has been so carefully preserved. In Wezlar’s many museums you can experience life at the beginning of the 19th century, and discover its visual culture. Weilburg lets you glimpse into the lives of the Nassau Lords who ruled over the Lahn valley. And as you cross the ancient stone bridge into Limburg, you will share the same view as a trader making the same journey 200 years ago. There are many other stories of the past that Westerwald is waiting to immerse you in.