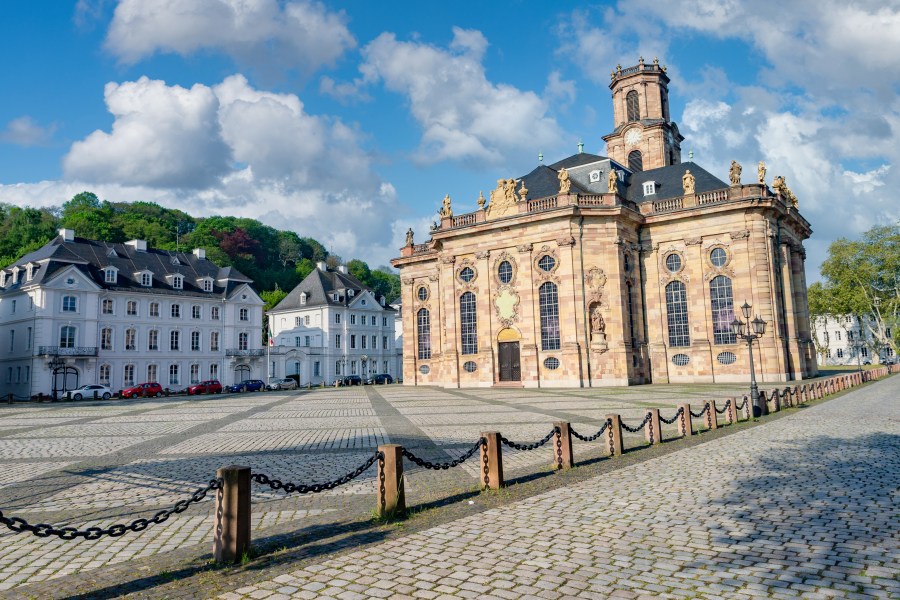 Summary: Come for the red light district stay for the natural landscape of the Saar Valley

Saarbrücken is not a top-tier tourist destination. It suffers from many of the ailments that befell most German cities in post-war period: random reconstruction efforts, active deconstruction efforts and an autobahn through the city center. However, the old Baroque center of St. Johann has been preserved along with fragments of the incredible protestant cityscape around the Ludwig-Church in old Saarbrücken. This guide will take you on a relaxed day-trip or perhaps a nice weekend while exploring the region.

Should you visit Saarbrücken?

Saarbrucken is a town best seen as a place to stay while you take day trips elsewhere. Surrounded by the beautiful Saar Valley, there are plenty of places to see in the area. The town itself has only a few corners worth visiting, and only a handful of touristic activities worth exploring. I think 5/10 is appropriate as a rating for tourism.

In terms of historical preservation, Saarbrucken has a unique charm to it, although partially destroyed in the Second World War, care was taken in the 1970s to finish the job. After people realized what had been lost, they went ahead in the 1980s and made it worse. We are fortunate then, that Saarbrucken still has anything worth seeing at all. The main square in the old town of St. Johann is beautiful and the reconstructed center around the Church of St. Ludwig is spectacular, as are both of the unique Rococo protestant churches. Definitely still on the lower end, so 4/10.

Like with other partially destroyed German cities, the lack of any significant tourist attraction beyond a few small bits and pieces has let the town retain its local identity. Restaurants are frequented by locals and most of the town caters to its residents. I think it scores highly in immersion with a 8/10.

Saarbrucken is an average German town. It has plenty of shops and restaurants, which have regular opening hours. The town however lacks in major attractions or museums, beyond the two reconstructed churches. The lack of effort made in the reconstruction of major landmarks beyond these churches is a real travesty. The demolition of the palace, new-town square and failing to reconstruct several important buildings in the post war period contribute to a low score of 4/10 for interaction.

The Conclusion: Yes, but not for the city. Go here to see the landscapes of the Saar Valley.

As with many cities, the main station is quite far from the center of the preserved old-town. This will make a quick visit between trains difficult, but not impossible. The Core of the old-town is centered around St. Johann, with a small “cultural” corners of preserved or reconstructed old-town on the other side of the river. The plaza around the Ludwigskirche Church is the most recognizable.

Not much old-town mind you, but enough for a few hours of exploration. If you want to see my suggestions for a visit to Saarbrücken, see the article below:

Anything other than churches?

Not really. There are a couple of museums, none of which are especially noteworthy for a general audience. One takes you through the remnants of the baroque fortification system which was dismantled in various stages. Although Germany has a low bar for interesting forts, this is still probably not worth your time. The second is housed within the old palace church. This museum shows mostly ecclesiastical and archeological artifacts without any context or coherency. I think this museum has potential if only they provided some meaning to their rather extensive collection.

For more detailed information about opening hours and accessibility check out this article here:

The logistics of trying to see everything can be a challenge, especially in a location is complicated opening times. Fortunately Saarbrücken is small and tourist friendly. Below I have summarized the opening hours for each of the accessible destinations in my guide.

A charming town with a longer, more interesting history than people realize. It’s a shame that so little of it’s heritage to the present day. Rather than seeing Saarbrücken for the sake of it, plan a visit to experience the beauty of the surrounding landscapes.

To learn more about the Saarland see the articles below:

Characterized by its rough landscape and way of life, the Saarland is full of things to explore. To the north there are the dense forests of Saar, and to the South the concrete Jungles of Völklingen. In Saarbrücken and elsewhere are the old-world cityscapes of these forgotten borderlands.

The Saarland is an under-explored region hidden in the western borderlands of Germany. Much of the region is covered by dense forests and mysterious ruins, dotted with timeless villages. So what are the best places to experience in this region of woodlands and concrete jungles?