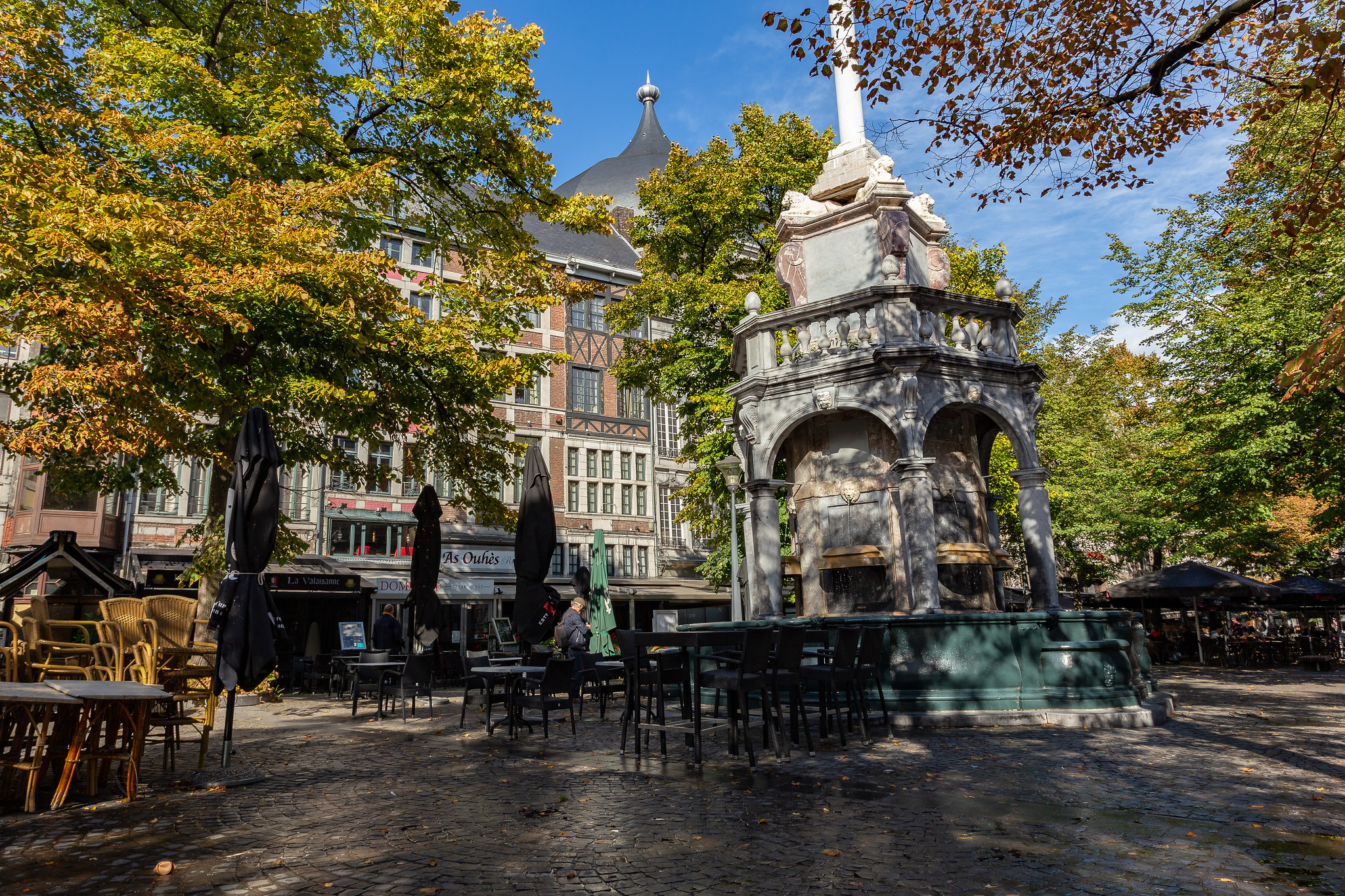 Summary: Yes, it has a charming old town, but it may require a sense of adventure.

Liege is an underappreciated travel destination in a country full of many world-class places to visit. The Prince-Bishops of Liege controlled most of the Mosan Valley from the early Middle Ages until the end of the Holy Roman Empire. Their rule represented one of the longest unbroken pillars of institutional authority in Europe and contrasted with the near-incessant turmoil of their neighbors. The city of Liege reflects this long history as an isolated borderland at the edge of the Holy Roman Empire and integrated into Belgium only 200 years ago.

The city represents the unique styles and traditions of the Mosan Valley. It sits astride the traditions of the Holy Roman Empire, imported from the Rhineland, and the customs of the French-speaking Walloon people, who looked south, to France, for ideas. Unlike Hainaut or Brabant, Liege and her lands were never part of the Burgundian inheritance and never formed part of the Spanish and later Habsburg Domain. The traditions and styles of the region are unique to Liege and create one of the most fascinating bubbles of artistic development in Europe.

With a history stretching back into the ancient past, we might expect more from Liege than currently survives. The city was the center of the Belgian industrial revolution, and Liege grew from an isolated town into one of the great cities of Europe. This rapid urban development renewed much of the historical cityscape and required that river be redirected to create more space.

Among other things, the city would become famous for guns, a legacy of her 19th-century role as the arsenal of Europe. Today, FN Herstal, the weapons company, still resides here. As a result, Liege suffered greatly at the expense of Belgian post-industrial urban renewal efforts in the 1960s and 1970s, and central authorities demolished about half of the old town.

Should you visit Liège?

You can tell Liege is a hidden gem because Belgium makes no effort to attract tourists here. The city is devoid of comfortable accommodations, and despite its many museums and attractions, minimal effort is made for non-French-speaking visitors. The situation is improving, though, and my most recent visit was much more pleasant than the first. Nevertheless, much of the urban core remains unwelcoming to tourists, and some places can feel like a ghetto.

I think Liege earns a 6 out of 10, only slightly above average for Belgium. It’s still in western Europe, so it’s not like trekking through the Caucasus Mountains.

Liege suffered the same fate that befell the city of Brussels and many other European cities in the 1960s and 70s. In essence, revitalization attempts were made of the then-decaying urban centers, featuring open spaces and monumental architecture of mid-century modernism, e.g., Brutalism. It would be a struggle to describe any of these efforts as a success, and Liege is unfortunately not an exception in this regard. The city lost most of its 19th-century cityscape, its waterfront, the fortress, and most of its Belgian art nouveau monuments.

Liege today is a collection of styles, with few areas of coherent architectural context from the pre-war era. That said, it has some spectacular Gothic and Baroque monuments considering the context of the surviving old-town and modern architecture, and thus form a genuinely unique cityscape. Considering the fate of many other European cities, Liege still offers one of the most interesting historical cityscapes. For that, I think 7 out of 10 is appropriate.

In contrast to the historical theme park of Bruges and the crowded center of Brussels and Antwerp, Liege offers a fully immersive trip into a Belgian city. Liege has its own food and culinary traditions, visible in any city bakery. The contrast is quite dramatic when compared to Brussels, for example. On the main square in Brussels, you have international chocolate brands selling mediocre products found in any supermarket. Lines to enter these stores may go around city blocks. Right on the main square in Liege, you have many small shops, patisseries, and bakeries serving the people who live and work there. The quality varies, but you will always have a unique experience.

It is fortunate for us then that such a unique city in Europe can retain its identity. In my opinion, Liege ranks among the most immersive cities in Europe and gets top marks.

Where Liege shines, in my opinion, is how open the city feels to a tourist. Though smaller than Brussels, it has an abundance of museums, churches, and stores worth visiting. The Grand-Curtis museum is one of the best-designed city museums in Europe, with an enormous collection covering everything from the guns of the city’s artisans to the palaces of the Nobility. Opening hours are more or less documented but, in any case, are regular. Overall it earns top marks for having enough to do for at least one to two days for most people.

The Conclusion: Yes, it has a charming old-town but may require a sense of adventure

Overview of Things to Do in Liege

The main things to see in Liege are its churches and museums. The development of the Romanesque and Gothic styles of architecture took a distinct path in the Mosan Valley. Liege represents this unique style with some of the most beautiful churches in Europe. Liege is honored to host what I consider the most beautiful church in Europe, St. Jacques. The richness of forms and colors is a unique synthesis of the Gothic and the Renaissance and influenced designs across the continent. The Cathedral and St. Martin also represent this unique strand of the Gothic style. The remaining significant churches of St. Denis and St. Bartholomew offer traces of the Romanesque but are today primarily Baroque constructions.

The Baroque style also saw unique development in Liege. The Prince-Archbishops were active builders in the city and throughout their lands. The Prince-Bishops favored French and Italian architects, but they occasionally developed and employed local talent. The Architect Johann Couven, originally from Aachen, was a favorite of the Liege court and contributed to several buildings in the city. One of these buildings includes my favorite museum, the Asembourg museum, which is dedicated to preserving a historical city palace designed by Couven in the 18th century. It is something of a counterpart to the Couven House in Aachen.

Otherwise, the city offers a wealth of streets and narrow alleyways that are full of charm and mystery. The 20th-century urban planning of the city is easily one of the worst in Europe, but there is enough to escape back into old Europe.

For more detail on opening times and accessibility, check out this table here: 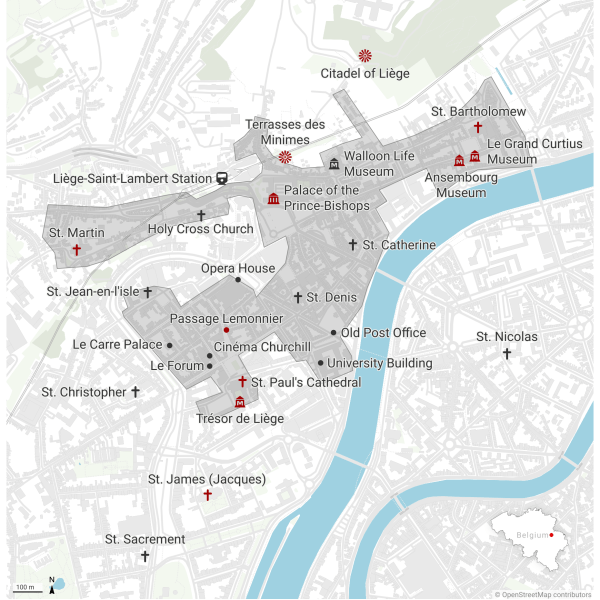 Liège is a highly interactive city with many things to do and see. Below is an outline of when things are open and where they are located. This should help plan…

Liege is a city you should visit if you have some spare time to explore while in Belgium or the Rhineland. Liege is a world-class destination for special interests such as Romanesque Architecture or Firearms Development. The city is also free of tourist hordes and offers a surprisingly unique cultural experience. However, the town lacks the splendor found in other Belgian cities and might be a disappointment compared to Ghent or Antwerp.