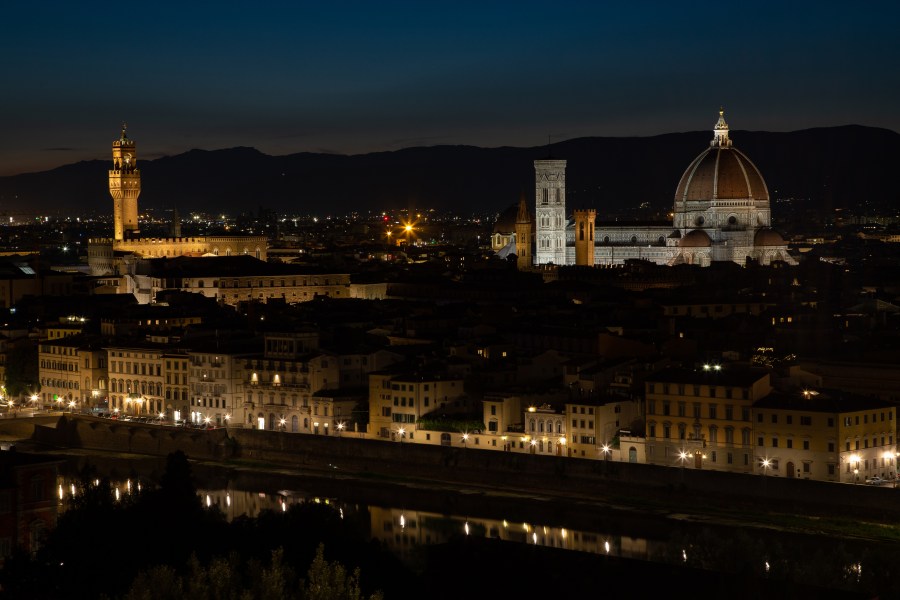 Summary: Yes, absolutely, but expect to visit a citywide art museum rather than an Italian destination.

The primary consideration on whether or not to visit Florence is the kind of experience you expect. Modern tourism thoroughly colonized the city, and tourists will vastly outnumber residents in the city center. It is not implausible that you may never hear Italian spoken on the streets.

So if you want to experience Tuscany or get a flavor of Italy, then Florence is not a good choice of destination. Nearby cities such as Siena or Lucca will provide a more immersive experience.

What makes Florence stand out is the historical narrative on display. It is best to treat the entire city as a museum and explore the history of the Renaissance and the Medici family. In this sense, few other European destinations are remotely comparable to Florence.

The story of Florence is the story of the Medici Family. Starting sometime in the mid-13th century and lasting until the family died out at the end of the 18th century, Florence, a small trade post on the Arno River, was transformed into a global power. During this period, the city of Florence accumulated vast wealth, defeated its rivals, and secured a position in Europe that protected it from the wars of great powers.

Florence is, without a doubt, one of the world’s greatest artistic heritage sites. A small but rugged mountain range, the Apuan Alps, protected Tuscany from European conflict in the Northern Italian states and the Po Valley. This isolation proved a blessing and a curse, as it preserved the region’s historical heritage but was ultimately responsible for its decline. Florence, in particular, was already considered remarkable for its beauty in the 18th century. It has a city center that was set aside for preservation before the Second World War, and aside from minor war damage, it retains its prewar cityscape.

Should you visit Florence?

Florence is a city built for tourists, and it is more than capable of handling the tourist volume that it receives. For you, the tourist, planning is mandatory to avoid long lines, but avoiding lines is always a possibility. Travel during the non-peak season will significantly improve the experience, especially as Florence never really shuts down for winter, like other cities.

The main challenge that the tourist volumes pose is the accessibility of public spaces. During peak travel season, some areas of the city will fill with so many people that you may find it nearly impossible to navigate the streets. This is especially true of the Ponte Vecchio and the Michelangelo Viewpoint. However, such crushing volumes of people should be rare or limited to certain times of day, such as sunset. Planning should alleviate most of the issues that arise from this.

Except for the bridges and some buildings along the Arno, the city was spared destruction in WWII. Combined with dedicated preservation efforts over several centuries, the city offers an unparalleled glimpse into Renaissance Italy. From a conservation perspective, Florence is one of the best-preserved cities in Europe.

It is worth mentioning here that the city is spectacularly beautiful. The crowds of tourists aside, the immersion into the city’s history is impressively deep. With hundreds of preserved viewpoints down long avenues or over the city’s tiled roofs, you can see what the last members of the Medici Family would have seen 300 years ago.

It would not be too much of an exaggeration to describe Florence as a historical theme park. Though I would prefer the term “open-air museum,” you should visit Florence with the expectation that any “cultural experience,” such as the food, will be carefully curated for a tourist audience. This curation is evident in the excessive number of gelato shops and Florentine steak houses. Note that this does not mean the food is terrible, just that it does not reflect what ordinary Italians eat. Festivals and ceremonies will likewise cater to tourists rather than to locals. The result is a highly commodified experience that may seem artificial to some.

Florence gets two points nevertheless as if you look carefully you will still find restaurants catering to locals and there are still no admission fees into the city itself.

There are few places in the world where everything is so accessible to the public in one form or another. As virtually nobody lives full time in the city center, almost every building is accessible as a hotel, restaurant, shop, or museum. The museums, churches, and palaces are optimized for large tourist volumes and have regular opening hours, ticket sales, and online booking in most cases. As a large city, there is enough to keep a person fully occupied for 3-4 days to see everything, and maybe even longer to see the things just outside the city limits.

The Conclusion: Yes, but expect to visit a citywide art museum rather than an Italian destination.

Overview of Things to Do in Florence

The list of things to see and do in Florence is quite ridiculously long. I recommend planning only one or two essential visits, such as the Uffizi or the Cathedral Dome, which must be booked at least a week (but often at least a month) in advance. Most pre-order tickets will come with a timeslot, and too many of these can be challenging to manage. You can then wander around and visit the other places at your leisure without worrying about meeting strict preset timetables.

Knowing what you are interested in can be helpful even if you don’t buy tickets in advance. Several groups of museums share combo tickets, such as the Cathedral-Baptistry-Opera-Museum combo or the Uffizi-Pitti-Palace-Boboli-Gardens one. These can save you money or make you rush through museums so you can cram in all of the places on your ticket. If you are only interested in the Uffizi, then there is no need to buy the combo ticket.

Beyond the typical destinations within Florence, check out a lot of the smaller museums and churches. Some of these sites, e.g., the Brancacci Chappel or the Santa Croce Church, have world-renown works of art.

In terms of local cuisine, most of what you see is targeted at a tourist audience, but that doesn’t make it bad food. In particular, the Florentine Steak is a UNESCO-protected culinary tradition with a specific set of rules regarding its preparation. Spending some money to give the steak a try is worth the time. There are many other Florentine or Tuscan specialties that you can taste, like Pici Noodles or Panzanella.

Finally, I recommend watching the sunset from Michelangelo’s Plaza above the city. You will need to get there at least one or two hours before sunset if you want any hope of getting a viewing spot, but it’s worth the wait. You can also stay a bit later and enjoy a romantic view over the city lights.

If you want to leave the city center and escape the tourist volume, then there are several interesting places just on the edge of town. The Villa del Poggio Imperiale is a Medici Villa built into an ancient castle, which the Habsburgs later developed into a Baroque Palace. Further north, there are two other Medici Villas and their Gardens, which may be of interest.

Opening hours in Florence can be arbitrary, so while you should always check before visiting, I compiled a list based on public sources. Florence is a highly interactive city with many things to do and see. Below is an outline of when things are open and where they are located. I won’t attempt to…

Florence is worth visiting by anyone interested in the arts or admiring the city from a distance. For architecture, the city possesses world-class monuments from the early-middle ages to the early modern period, covering every artistic period. For Decorative and fine arts, the emphasis is on the development and perfection of the Renaissance style, from the high Middle Ages to the end of Mannerism. Unlike a distant museum, exploring this heritage in its original context is unique and immerses visitors in the city’s past completely. This immersion comes at the cost of a local identity, which has been entirely lost to commodified mass tourism. With such a dichotomy on offer, it should already be clear if you are interested in visiting Florence.

Return to the Republic of Florence

Explore the European Renaissance through a legacy of art and stone
Explore
We use cookies on our website to give you the most relevant experience by remembering your preferences and repeat visits. By clicking “Accept”, you consent to the use of ALL the cookies.
Cookie settingsACCEPT
Manage consent