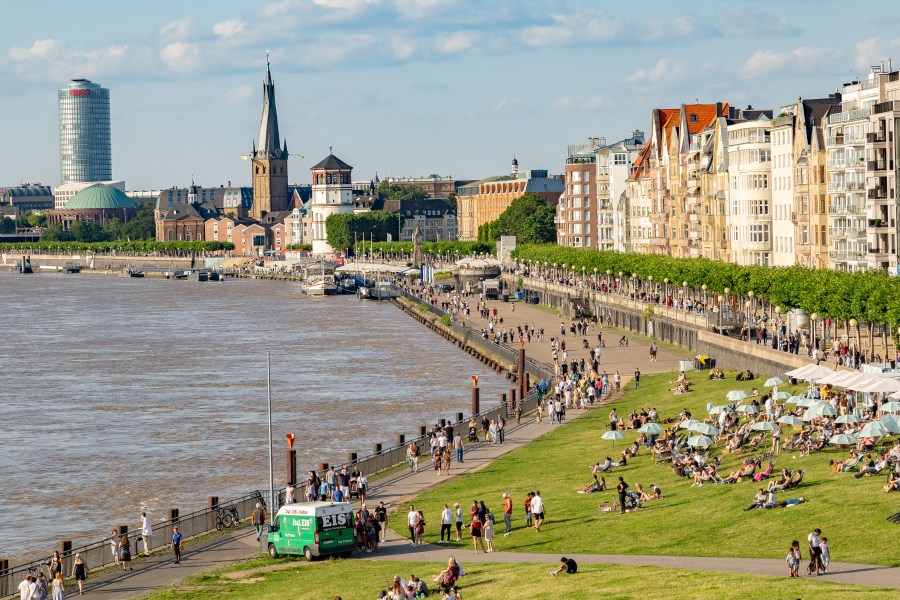 Summary: Skip Cologne, this is the best city to visit on the Lower-Rhine and comparable with Hamburg or Leipzig for its cultural offerings.

Contents hide
1 Should you Visit Düsseldorf?
1.1 Tourism
1.2 Historical Preservation
1.3 Cultural Immersion
1.4 Interaction
1.5 Traveling Around Düsseldorf
1.5.1 Areas of Old-Town
1.6 Travel Guide to Düsseldorf
1.7 Düsseldorf Opening Hours
1.8 Life in Düsseldorf
1.9 Traditional Food and Drink of Düsseldorf
1.10 Conclusion
1.11 Return to the Lower-Rhine
1.11.1 Lower-Rhine Valley
Düsseldorf is one of Germany’s largest cities and belongs to the large urban region that stretches along the Lower Rhine. Unlike its neighbor Cologne, Düsseldorf is often not present on tourist itineraries for the Rhineland, and this is is a major travesty. Cologne is among the worst tourist destinations in Germany, but Düsseldorf is among the best, and so I hope to help illustrate this difference with this article.

Just as a general disclaimer, the Lower-Rhine region is generally not worth visiting. Without a desire to see or experience something specific like Carnival, you will be disappointed. If in doubt, go to Belgium, even Liege, its not much further away and it is the objectively superior travel destination. Most of region, including Düsseldorf was destroyed in the war.

That being said, Düsseldorf is an exception for the region. The city has both the only surviving old-town and local traditions that are worth experiencing. Here you can still drink a traditional Düsseldorfer beer in an old pub from the 19th century while enjoying the company of local residents. Alternatively, you can slurp soba noodles in one of the most authentic Japanese restaurants in Europe. Düsseldorf is a modern city with much to offer.

Should you Visit Düsseldorf?

Düsseldorf is a major trade-fair city and is a major center for the services industry. As a result, it has more than sufficient infrastructure for the volume of tourists and businessmen that the city receives. There are plenty of hotels, restaurants and space for the summer tourist hordes. Additionally, there are plenty of things to see and do which will keep you occupied for at least one to two days.

The main downside is that the city is very dirty, especially the nice parts of the old-town. The tourist districts also happen to be the party districts, so every Friday and Saturday evening the alleys of the old-town become fields of garbage and broken glass. It goes without saying that you don’t want to stay overnight in the old-town. The other main downside is the lack of any single tourist attraction, like the Cologne Cathedral, which might be the focus of a trip. This is a city where you enjoy the atmosphere and the food rather than the sights.

Overall, Düsseldorf scores highly with a 7/10.

Düsseldorf has an enormous urban core by German standards, and virtually none of it survived the war. This will be obvious when you leave the main station. Since the city was spared the bulldozer and not reconstructed tabula rasa, the city is full of modern buildings built on the historical city grid.

In the old-town, care was taken to tastefully integrate new construction. Stylized new buildings blend into the old-town cityscape and provide an immersive feel, despite the overall low-level of preservation. This is an approach I think more German cities should have adopted, as Düsseldorf ranks leagues above other cities like Stuttgart and Cologne. I would give the city a 5/10.

Düsseldorf is of the best cities in Germany to visit for the cultural scene, especially for the arts, trade fairs and cultural events. While nothing compared to Berlin, I think Düsseldorf is comparable to Munich in this regard and it deserves a lot of praise. Instead of drinking a watery pils with bus-loads of tourists in the Hofbrauhaus in Munich, you can stand outside Uerige in Düsseldorf with aggravated businessmen who just want a beer after work.

Düsseldorf is also known for having the better Carnival parade over Cologne, though there party is considered better. That Düsseldorf even competes in this regard, shows the lively urban culture that the city has. I subtract two points, to give it an 8/10 only because the city is still kind of boring during the week. It’s not in the same league as Berlin.

Düsseldorf is one of the most interactive cities in Germany, comparable with Hamburg or Leipzig (though certainly not on par with Munich or Berlin). The city has museums, art galleries, churches and restaurants galore. Additionally, the tourist industry is very professional, meaning that all the museums, churches and etc, have websites and published opening hours. So the city gets top marks at 10/10.

The Conclusion: Yes you should visit Düsseldorf, but not at the expense of somewhere more interesting.

The first thing to consider when travelling around Düsseldorf is public transport. The city is huge, and walking from the main station to the old-town is a 20-30 minute endeavor. Walking across the old-town itself can also be exhausting, and might also get boring after awhile. Furthermore, driving is not really an option in the old-town and the city’s roads are a labyrinthine mess. I would highly recommend not driving within the city, and instead take advantage of the subway and light rail systems.

The next thing to consider is exactly where to go. For those people interested in hunting down the surviving bits of Art Nouveau and Historicist architecture public transit is a necessity (spoiler: you will be disappointed).

The core of the Düsseldorf old-town is the city center. Here you will find a partially preserved district with buildings representing the 13th to the 21st centuries. The old-town is remarkable for having survived in some form to the present. You can read a more in-depth guide to the old-town here:

Despite wartime losses, Düsseldorf has a cityscape offering examples of virtually every period in architectural history. It offers Germany’s most varied architectural cityscape and is a must for anyone interested in the history of architecture.

In general, you will find four areas of higher-density old-town outside the center:

Düsseldorf is a highly interactive city with many things to do and see. Below is an outline of when things are open and where they are located.

The first thing to experience in Düsseldorf is the beer. I before going any further I would recommend planning some visits to your nearest brewery.

You can read more about Düsseldorf’s food and drink culture in this article:

Traditional Food and Drink of Düsseldorf

Düsseldorf is the best place to be in the Lower-Rhine Valley. It has all of the best restaurants, culture and nightlife that the region has to offer. Let’s take a quick tour of what there is to discover.

Düsseldorf is an underrated destination for those interested in well preserved old-towns. Though it ranks highly relative to most German cities, it should still lie quite low on a global list of places to visit in this regard. Indeed, the main reason to visit Düsseldorf is the complete cultural experience. Discover some new beer, some new friends and walk through the old town.

Otherwise you can explore some of the more interesting sites in the region: