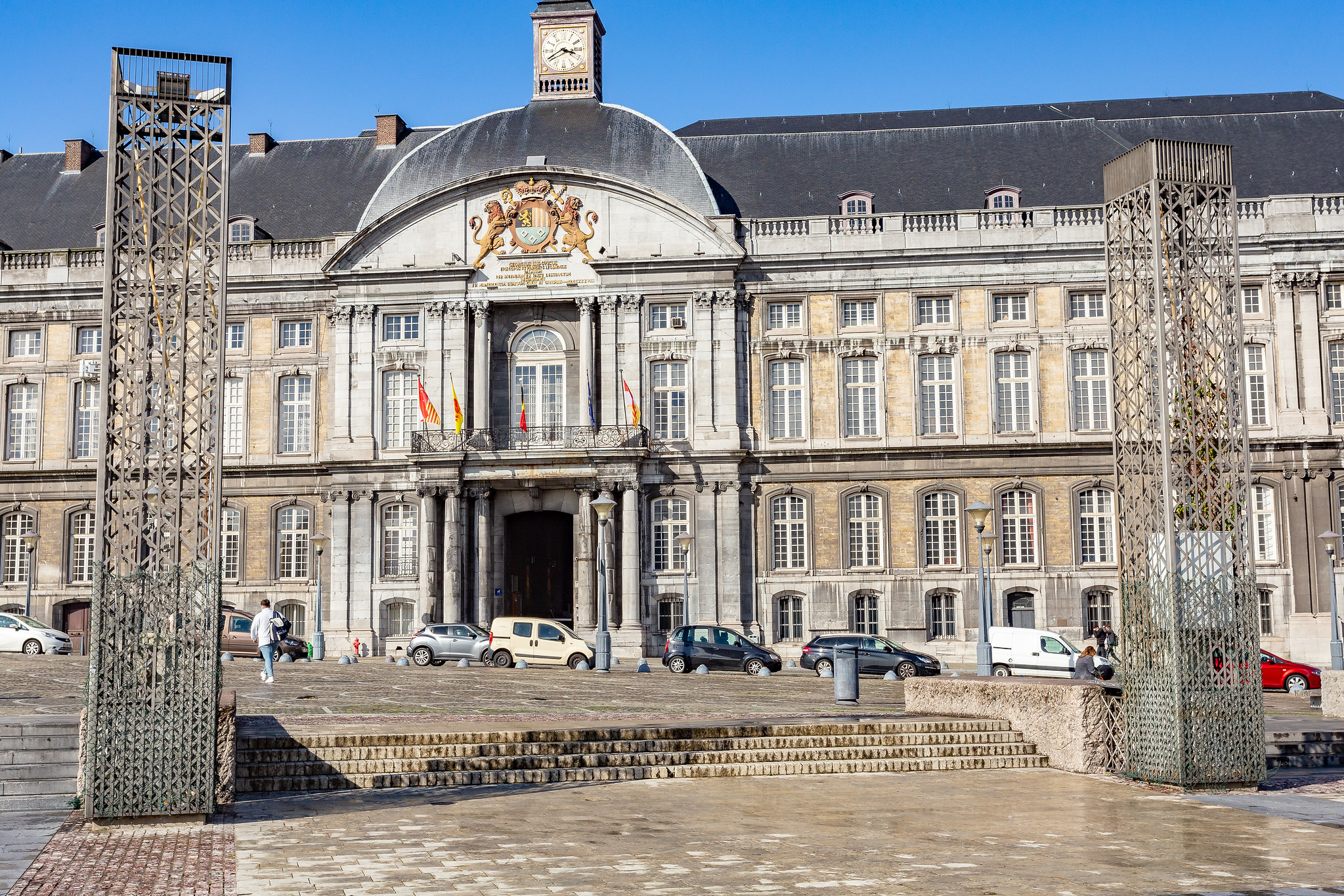 The valley of the Maas or Meuse River was shielded from the tribulations of its neighbors by the powerful Prince-Bishops of Liege. Between the 15th century wars of Charles the Bold and the arrival of French Revolutionary troops in 1789, the region enjoyed centuries of relative peace. This enabled the landed aristocracy of the theocratic state to build representative homes for their families without the risk of war or looting. Though much poorer than their counterparts on the Loire River in France, the region is known for its uncountable number of palaces and landed estates that survive to today. So which ones are worth visiting? This guide will summarize the best palaces to visit in Mosan Valley.

Palace of the Bishops in Liege

At the heart of the city of Liege is the great Palace of the Prince-Bishops. There has been a palace here for the bishops since at least the 10th century and was originally incorporated into the cathedral complex. The cathedral and most of the surrounding square were destroyed by French Revolutionary Troops. The site of the cathedral was built over in the 19th century and the Palace became the city hall, with a eastern Wing added in a neo-Gothic style. Though the interiors are not accessible to the public, they substantial portions have survived to the modern day.

What is easily accessible however, is the spectacular central courtyard, accessible through the main portal facing the square of St. Lambertus. When facing the outer facade, we see the typical hall marks of the French Baroque in the style of Louis XIV, who initiated the construction of the Versailles Palace. In this style we see the conservative use of classical ornamentation, where your eyes are drawn to a single central point: the main entrance in this case.

Through the gates though and you encounter something completely different. The flowing arcades and detailed floral motifs of the Italian Renaissance, drawing heavily on the Gothic traditions of the lowlands. It was the masterpiece of the Greatest Bishop of Liege, Érard de La Marck who introduced the Renaissance to his state. The scale of the construction makes it one of the largest Renaissance monuments in northern Europe to have survived. It also demonstrates the synthesis common in the Renaissance styles in Northern Europe, where Gothic style is effectively extended onto a Renaissance paradigm.

The title to the Castle of Freÿr was given to the Beaufort family in the 15th century by the Count of Namur. The castle was destroyed by the French a century later, and construction on the current building started in 1571. The surviving east wing of the palace is one of the earliest surviving examples of the Mosan Renaissance style. The style is most visibly marked by its alternating use of red brick and blue-gray granite. It displays a conservative dependence on a largely Gothic building paradigm, that would dominated until the 17th century.

Owned today by the same family that constructed it, the palace interiors are completely preserved. Over the centuries, the Beaufort family accumulated furniture, small items and gifts from prominent guests, all of which remains visible in the palace today. This includes decorative arts and inventory from nearly every century. Also noteworthy, the palace possesses the region’s only fully preserved Baroque gardens from the age of Louis XIV. The family has opened the palace to the public with regular opening hours.

The Modave Palace stands in stark contrast to the one in Freÿr. Whereas Freÿr was built in stages over the course of 400 years by a single family, Modave was built in one style at one point in time and has changed ownership continuously. The Modave Palace is built in the style of a French-Baroque country estate, based heavily on the works of François Mansart. This style emphasizes the classical traditions of the Baroque and separates it from the more opulent Baroque of the Holy Roman Empire. Unlike the other palaces, this one was a major estate of the Prince-Bishopric, giving us a window into the life of their government.

The Palace today is owned by the Belgian government and is open to the public. It offers well preserved interiors and a near complete inventory, though much of it is not original to the palace. It nevertheless offers the region’s best window into the Age of Absolutism during the reign of the Prince-Bishops in Liege.

The palace of Lavaux-Sainte-Anne represents the only palace on this list to have been originally constructed by the Prince-Bishops of Liege. The castle was originally intended as a border fortification on an old Roman trade route to Luxembourg. As it would turn out however, its main enemy would be the city of Dinant, which saw the castle as a threat to their prosperity. Subsequent wars, especially those of Charles the Bold would see the castle largely destroyed. Due to the castle’s immediacy to the Prince-Bishops it was rebuilt at the end of the 15th century. New additions occurred over the following centuries, until French Revolutionary troops devastated the building.

It was restored from a ruinous state in the 20th century, and today offers tourists one of the most impressive looking Gothic-Renaissance palaces in the region. The interior is open to the public, though as a museum for rural life in the region.

The Castle of Corroy gets its name from the County of Corry, a minor title held by a branch of the Nassau Family. The castle was originally built by the Dukes of Brabant to defend their southern border against the Counts of Namur. The title fell to a catholic branch of the Nassau family during the wars of religion in the 16th century. Now a vassal of the Habsburg Family, the castle remained in the possession of the Nassau-Corroy family until the end of the 20th century.

The most interesting part of this caste are the well preserved late-Medieval exteriors. Of the original medieval fortification, only the central keep and outer curtain wall have been lost, the result of French invasions during the 17th century. The building itself draws heavily on French and Italian castle design.

The interiors are accessible to the public, but are comprised largely of high quality 19th century historicist designs with surprisingly high quality inventory as well.

The castle of Vêves is the best preserved medieval castle in the Mosan Valley. With foundations dating back to the 8th century, the core of the current structure dates to the 13th century. Like Lavaux-Sainte-Anne, it was destroyed by the forces of Dinant in the 15th century, and was rebuilt in the style of the Renaissance.

The interiors were devastated by French Revolutionary troops and today are not original. Though guests can wander the halls of the museum dedicated to the castle’s history. The architectural high-point of the castle may be its spectacular Renaissance courtyard.

Constructed between 1706 and 1711, the Waleffe Palace represents the archetype of the Mosan baroque palace. We can see it as a simplified version of the French styles of Louis XIV. The exterior is simple, with a focus on traditional classical ideas. Perhaps somewhat indicative of the Mosan Valley are the two wings of the palace extending lower than the Core de Logis. As with contemporary palaces in France and elsewhere, it would have been integrated into a garden complex, which today has not been preserved.

Available for tours on request, the interior is much more elaborate. Many of the state rooms are fully preserved in a richly decorated style of Louis XIV.

Along with Castle of Freÿr, Jehay represents the traditional forms of the Mosan Renaissance. In contrast to most similar constructions of the period, Jehay was not build on the foundations of an older structure. It first appears in the records from around 1550, around the high point of the Renaissance style in Northern Europe. The use of Medieval forms, such as the round tours and polygonal layout of the central keep and moat reflect a local synthesis of Renaissance forms with traditional architecture. The checker-board pattern of bricks is, however, unique to Jehay. Based on designs from the Loire Valley, the conscious use of colors from the region make it highly indicative of the Mosan Region.

The interiors of the palace suffered greatly from the centuries, starting with the sack by French Revolutionary troops. Most of the complex was rebuilt several times in the 19th century. The interiors fell into disrepair and were largely dismantled in the 20th century. Today the property is being restored by the state of Belgium to its pre-war condition. The palace is open to the public but its condition will vary depending on the state of the restoration.

The Palace of Warfusée should be seen as an evolution on the Palaces of Waleffe and Modave. Built entirely in the style of Louis XV, it reflects the late Baroque and Early Rococo styles popular on the eve of the French Revolution. With its simple forms and lack of extravagance on the exterior, it shows similarity with the styles of the Rhineland and Holy Roman Empire. As the Palace was initially constructed by the d’Oultremont family, who controlled the Prince-Bishopric, it can be seen as a residence of the state of the time.

The austere exterior betrays one of the most extravagant interiors of any preserved palace in the region. Unfortunately, access is only available by appointment with the d’Oultremont family, who still owns the palace.