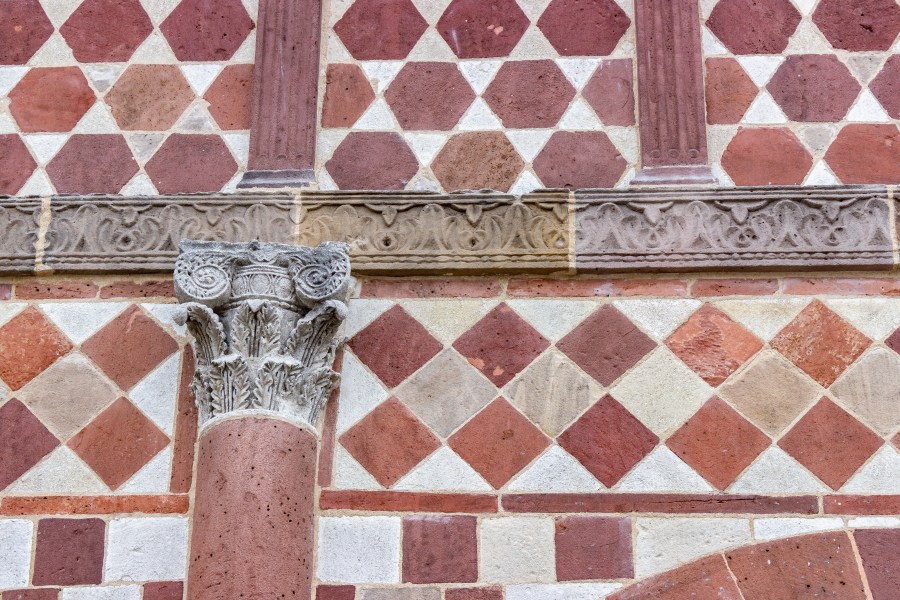 Contents hide
1 The Ruins of the Monastery at Limburg
2 The Town of Speyer
3 The Village of Ladenburg
4 The Castle-town of Dilsberg and Hirschhorn (Optional)
5 The Pfalz at Bad Wimpfen
6 The Cistercian Monastery of Maulbronn
7 The city of Worms and the gatehouse at Lorsch (Optional)
8 The Cistercian Monastery of Otterberg (Optional)
9 The City of Mainz
10 Travel Guide to Mainz
11 The town of Oppenheim
12 Selected Bibliography
13 Image Credits
14 Return to the Electoral Palatinate
14.1 Electoral Palatinate

This tour takes you through the heartland of the Holy Roman Empire during the High Middle Ages (From about 1100-1250 ce.). This was the political center of the Empire, the most powerful state in Medieval Europe. That the Palatinate encompasses this region is not really a coincidence, the name “Palatinate” comes from the Palatine Hill in Rome, an area upon which the Roman emperors build their palaces.

The Upper Rhineland served a similar purpose for the early Frankish kings who settled here. The main imperial cities of Mainz-Worms-Speyer held great symbolic importance, and were for that reason targeted by invading French forces seeking to weaken legitimacy of an already fragmented state. As a result, virtually nothing remains (even prior to WWII) of this heritage, so we will have to go looking for it.

The Ruins of the Monastery at Limburg

(Neustadt an der Weistraße): In reality the ruins are in Bad Dürkheim, but the town was annihilated in WWII, so there’s nothing to see there, Neustadt is much a nicer place to spend an afternoon. The Monastery of Limburg was the first mega-project of the Imperial Salian Dynasty in the early 12th century. Its dramatic ruins are within sight of the Hardenburg Fortress, both destroyed by the French in the wars of the 17th century.

The Town of Speyer

Here in Speyer the Imperial image program of the Holy Roman Empire reaches its dramatic apogee. The Imperial cathedral was built in a minor city with the goal of turning it into a capital worthy of an Empire (or rather a sepulchral monument worthy of an Emperor). Though the city was destroyed twice, in the Nine Years War and later by Napoleon, there is a lot too see, but the only the Cathedral belies its medieval heritage. The western facade is a 19th century replacement for the simple post-war baroque facade constructed after the town’s desolation in 1697. The eastern choir, crypt and side chapel are the most spectacular, with rich ornamentation and impressive scale.

The Village of Ladenburg

Although it too was devastated by the French, more of Ladenburg survived than in other locations. Along with Bad Wimpfen, it probably has the oldest surviving cityscape in the Electoral Palatinate. It was once a major city under the control of Worms, and the Emperor was there on numerous occasions. Roman Ruins can be found scattered round the town, a relic of its origins as a military way-station. The crypt of the church of St. Gallus and the Towers of St. Sebastian are some of the earliest constructions of the Romanesque in the Rhineland.

Perched high above the Neckar, the towns of Dilsberg and Hirschhorn command a dramatic view of the Neckar as it cuts through the Odenwald forest. Dilsberg was once a secluded fortress build as an emergency bunker by the Electors of the Palatinate. The other castles reflect the varied political dynamics of this strategic region. Surrounded by castle ruins, this part of the lower Neckar is just simply a fantastic place to explore. Other than a cute old town with buildings mostly from the Baroque period, there’s nothing super special about Hirschhorn, its just a quaint place to have a beer.

The Pfalz at Bad Wimpfen

The small town of Wimpfen perched on a cliff above the Neckar was originally a major Roman city, and would become one of the first imperial courts established under the Staufen dynasty. It has a wonderful old town with the ruins of the Imperial Palace overlooking the town and the river. The ruins show a connection between similar palaces built across the empire, evidence of a unified image program even in the Medieval era. Don’t miss the ancient monastery on the other side of the river.

The Cistercian Monastery of Maulbronn

I suspect for most people, this will be the highlight of the trip. Maulbronn possesses one of the most well-preserved medieval monasteries in Europe, its uniqueness and splendor has earned it a deserved UNESCO World Heritage label. Moreover, built at the transition form Salian to Staufen architectural norms in the mid 12th century (and later extensively modified) it provides a fully immersive glimpse into a visual space belonging to previous centuries. The Cistercian order was perhaps the single leading source of architectural innovation in the Holy Roman Empire. The styles and techniques of the Cistercians set norms and ideals that would persist for centuries, even in fully unrelated architecture.

The city of Worms and the gatehouse at Lorsch (Optional)

Worms was destroyed in WWII and the decision was made to rebuild it tabula rasa. Nothing remains of the medieval city except for the cathedral which was miraculously spared destruction in the war. Visiting Worms should not be done over a more interesting destination, but of the three imperial cathedrals, Worms is by far the most spectacular, covered in rich ornamentation and filled with an atmosphere heavy with time. Worms was the center of arts for the entire region during the High Middle Ages. Its influence can be felt as far as Erfurt and Cologne. Lorsch can be seen in the same day, its more a niche destination, with the ancient Carolingian gatehouse, probably the single surviving building of such quality from this time in Europe.

The Cistercian Monastery of Otterberg (Optional)

The Cistercians exterted a great deal of stylistic independence, but sometimes they too were bound by the traditions of the past. The monastery church of Otterberg is all that survives to the present day, but it, along with the Cathedral of Bamberg, reflect a unique moment in architectural design. Started in 1169, here the Gothic style is in full swing, yet simultaneously it is not. In Paris, construction of the Notre Dame Cathedral has already started, a relatively late building for the French Gothic. Construction in Metz and Strasbourg show that knowledge of the Gothic is widespread in the Empire.

Why then persist with with the archaic forms of the Romanesque? The Staufen Emperor yet lives, and only over his dead body will there be a French church on imperial soil. (This is in fact precisely what happens. Almost to the day, on the death of the last Staufen monarch construction of the Cologne cathedral begins, definitively ending the Romanesque period)

The City of Mainz

Mainz is probably one of the most frequently destroyed cities in modern day Germany. It was bombarded and burned on a number of occasions, and WWII effectively finished the job. Yet in a gift to future generations, they did not rebuild Mainz tabula rasa and indeed even invested in its reconstruction. Mainz will appear on other lists for its baroque architecture, but its medieval heritage is worth noting. The Cathedral of Mainz is the only one in the Rhineland to have preserved its cloister and much of its Medieval inventory. A visit to the cathedral’s museum and the Landesmuseum of the modern day Rheinland-Palatinate is worth the trip. Here you will cover the region’s artistic history in much more detail. The small bits of surviving old town are also charming and worth a trip regardless. Enjoy a glass of wine in the dramatic shadow of the great cathedral.

The town of Oppenheim

Here, the high middle ages come to an end for the Holy Roman Empire. Oppenheim possesses the only “French” styled church in this region with its rich late Gothic ornamentation, flying buttresses and rich stained glass. In reality it reflects a combination of styles from Cologne, Freiburg and Strassbourg, but here the cities of Mainz, Worms and Speyer are absent. History has moved on, and the fragmented Empire would never again see a unified style so dominant as the Romanesque. Oppenheim is in wine-country so make sure to enjoy the town’s many wine producers, charming baroque architecture and specacular vistas of the Rhine valley.