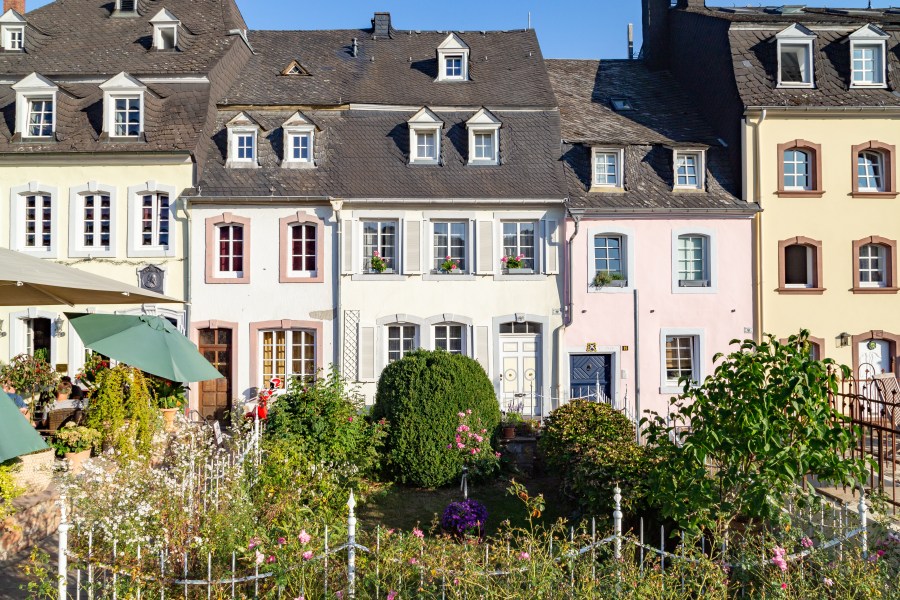 Contents hide
1 The Fortress City of Koblenz
2 Travel Guide to Koblenz
3 Mystery of the Crusades – Kobern-Gondorf
4 Dual Custody in Alken – The Castle of Thurant
5 Medieval Ingenuity – Ehrenburg
6 Medieval Residence in Castle Eltz
7 “Cathedral” of the Mosel – Treis-Karden
8 The Imperial Castle of Cochem
9 The Fortified Church of Münstermaifeld (Optional)
10 The Mosel-Landscape at Alf (Optional)
11 The Town of Traben-Trarbach (Optional)
12 The Half-Timbered Architecture of Bernkastel-Kues
13 Trier-Pfalzel (Optional)
14 The Great City of Trier
15 Travel Guide to Trier
16 Selected Bibliography
17 Image Credits
18 Return to the Mosel-Valley
18.1 Mosel Valley

This tour focuses on the easily accessible reaches of the Mosel valley, an area noteworthy for its Medieval heritage, Romanesque churches and ruined castles. The tour starts in the Middle-Rhenish city of Koblenz, the administrative capital of the Trierian Archbishops after the middle ages and follows an ancient trade route to the medieval capital of Trier. The valley is dotted with crumbling castles and towering church spires, many built by the Archbishop as a show of power.

The Fortress City of Koblenz

There’s quite a bit to see in Koblenz, and fore a more detailed guide see the link below. Since we are interested mostly in the Mosel River, a quick visit to the classicist City Palace, once the administrative seat of the Archbishops, gives an indication of their wealth. A much larger palace once existed at the base of Ehrenbreitstein, but it was destroyed by Napoleon. Then, walking parallel to the Rhine, peek inside the church of St. Castor, this is the oldest building in Koblenz and is dedicated to a local saint, St. Castor, who we will meet again later.

Finally, head to the mouth of the Mosel, now the “German-Corner” with the giant statue of Kaiser Wilhelm I. Walking parallel to the Mosel, you will pass by the old castle. This was the medieval seat of the Archbishops in Koblenz, and you can think of it as the first castle on Mosel. From here, you can take the train from the more convenient Koblenz-City station to the next stop.

Mystery of the Crusades – Kobern-Gondorf

According to legend, the Chapel of St. Mathew built within the walls of a 13th century castle in Kobern once housed the head of the Apostle Mathew. The castle is now a ruin, and the relic disappeared centuries ago, but the chapel has been completely preserved. Its of a design not found anywhere else in Germany or the Lowlands, and its closest archetype is likely the Templar’s chapel in Tomar Portugal. The ornamentation show’s strong North-Rhenish connections, perhaps with St. Severus in Boppard. Why it was built and why the relics of such an important figure were kept there remain a mystery.

Dual Custody in Alken – The Castle of Thurant

This castle is perhaps one best enjoyed from the outside. The massive double-keep construction are the result of a split ownership. One tower was controlled by the Elector of Trier and the other by Cologne. The inside is mostly a 19th century interpretation of a castle and not really worth visiting. From a distance it remains one of the most impressive looking castles on the river.

The ruins of the Ehrenburg lie some distance from the Mosel. To there there a short hike can be taken up a path carved by a small stream. Here you will pass beautiful waterfalls and an primeval Germanic cult site dedicated to the god of thunder. The castle itself is remarkable for the round entrance tower. This required visitors to ascent a spiral ramp with a protected inner column. From there defenders could fire on attacking troops.

Like the Ehrenburg, the Burg Eltz is a short distance from the river, but you are rewarded with one of the best preserved castles in Europe. It was built in the 13th century as fortified living quarters for the Eltz family, who continue to operate the building today. There are preserved interiors from the late-Gothic onward and a remarkable collection of inventory from the Renaissance to the present. Be warned though, that it is one of Germany’s most popular tourist destinations, an off-season visit is recommended.

“Cathedral” of the Mosel – Treis-Karden

St. Castor was a pseudo-historical figure who from France who settled at this site in the 5th century. His relics became a source of money for the town, as pilgrims came down the Mosel to pay respects. By the 9th century, the relics were relocated to Koblenz were they remain today (in the 19th century, a handful of relics came back to Karden). The site would remain a destination on a larger network of trans-European pilgrimage routes. Today the Church of St. Castor in Karden is a beautiful example of late Staufen-Romanesque architecture from the 13th century, already showing a greater willingness to experiment with the Gothic than elsewhere in the Rhineland.

The castle we see today is actually a 19th century interpretation of medieval castle. Though it is more historically accurate than attempts elsewhere. The original building would have been the pride of Cochem, an Imperial city, which owed allegiance only to the Emperor. The town itself is a collection of buildings from a variety of periods, but reflect mostly on the tastes of 19th century historicism. This is a great spot to travel from, as there are countless ruins and villages to explore in the immediate vicinity.

The Fortified Church of Münstermaifeld (Optional)

This is more of a special interest destination due to the difficulty of arriving here. In the 11th century, a fortified church was constructed here, of which only the impressive west tower remains. The rest of the building is in the same Staufen-Romanesque style we say in St. Castor in Treis-Karden.

The Mosel-Landscape at Alf (Optional)

A stop here (or in Beilstein) is recommended for the views of the Mosel valley. A short walk up to the monastery ruins of the Marien Burg or a much longer walk to heights above Zell provide some spectacular views of the river-landscape.

The Town of Traben-Trarbach (Optional)

Stop for a visit to see the small town architecture and have some Mosel Riesling. Climb up to the Grevenburg castle ruins and get another splendid panorama of the landscape.

The Half-Timbered Architecture of Bernkastel-Kues

Bernkastel is a little bit more substantial that Traben-Trarbach, and has one of the nicest collection of Half-Timbered buildings in the region. This is another great place to walk around and enjoy the fairy-tale or romantic atmosphere of the baroque and historicist cityscape.

Originally, Emperor Constantine, after building his capital in Trier, built his personal palace outside of the City in modern day Pfalzel (The German word essentially means “by the palace”). With the end of the Roman Empire, parts of the palace were incorporated into a monastic church complex. This larger structure was reduced over the centuries, and then heavily damaged by allied bombing in WWII. For the dedicated can find traces of the palace complex, both in the reconstructed church and in nearby buildings. The town itself is rather charming and is worth a quick visit if given the opportunity.

The Great City of Trier

Like Koblenz, Trier deserves a guide of its own. There are a quite a large number of things to see or do. For this tour, the most interesting site would be the contrast of the small Baroque/Rococo residence (It was small even before WW2) to the sprawling complex in Koblenz.

The location of Trier was chosen by the Romans as a strategic location from which to control and reinforce the Rhine borders of a continental Empire. By the end the of the Middle Ages it was apparent that its location in a narrow valley was a strategic weakness for a small princely state. Important matters were increasingly moved to the more defensible city of Koblenz. By the 18th century, Trier was an economic backwater, relevant only for its symbolism as a Roman city and location of the diocese.

Also of interest would be the Gothic Church of our Lady. When we were closer to the Rhine, the Rhenish flavors of the Romanesque predominated. Here, it is the French Gothic that finally emerges, though not in a traditional French layout. Indeed this church is the first pure Gothic construction in Germany, and would influence later constructions across Germany. After that, enjoy the small, but remarkable old-town with some Semi-Sweet Riesling or some Dry Slate-Riesling for the best Mosel experience.