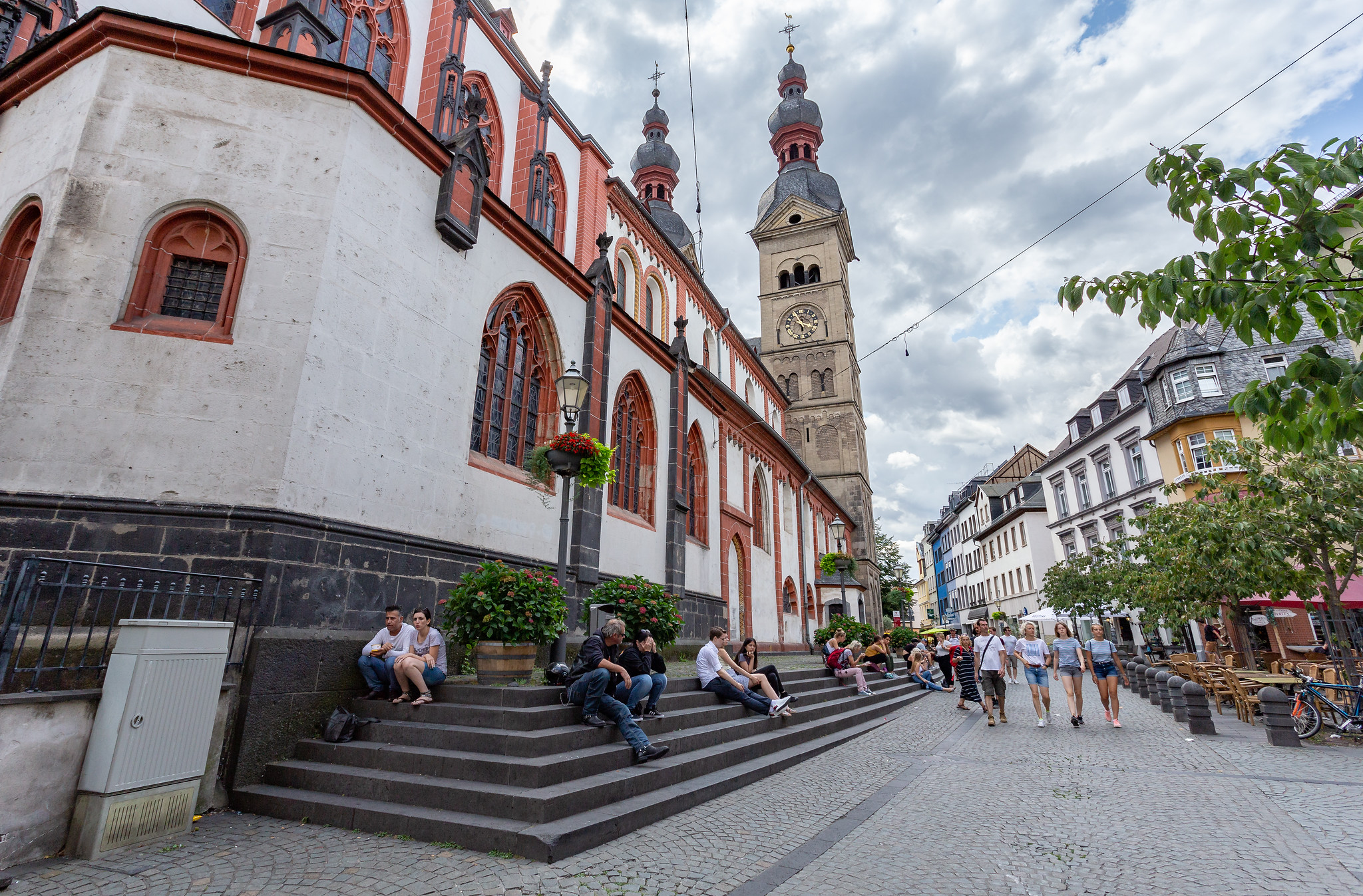 Summary: The small surviving old-town of Koblenz offers a glimpse into a rich past at the center of aa

At the confluence of the Mosel and Rhine, Koblenz is perhaps the most strategically located city in Germany. It’s strategic importance was understood even by the Romans who established the fortified town of Confluentes to control the traffic on both rivers. Today, it’s the fortress of Ehrenbreitstein that dominates the confluence of the Rivers, with the small old town of Koblenz offering a charming afternoon adventure.

It’s strategic importance meant that the city was almost entirely destroyed in WWII, however the fortress survived without significant damage, as did parts of the old town.

How to See Koblenz

The first thing to consider when visiting is that the main train station is in fact nowhere near the old town or fortress. If you are not driving then I would recommend taking a train to Stadtmitte station or using the city bus system. There will be nothing worth mentioning in the otherwise 20-30 minute walk across the city.

Koblenz is often considered one of the highlights of the UNESCO Middle-Rhine Valley. It would be more fair to say that the Fortress of Ehrenbreitstein is the real highlight. The city itself is only on par with the many other places in the valley.

From there there are number of things to see and do, below I have broken them down into their historical context.

Nothing survives today of the Roman settlement, which was likely abandoned for several centuries before it was rebuilt as a residence for local Frankish nobility. The visible history of Koblenz starts first in the 10th century, when it became part of the Holy Roman Empire under the Archbishop Elector of Trier.

From this period the most important monument is the church of St. Castor. Built outside the old Roman walls as early as the 8th century, it was used as a neutral meeting place for regional nobility until the 11th century. The current building dates from the 1170 and reflects the typical styles of the Middle-Rhine Romanesque during the Staufen period. Indeed, it was in this church that the first Hohenstaufen was elected Emperor. The only remnants of the Carolingian church can be seen in the façade as the white marble capitals. (The spectacular vaulting is from the 15th century) Noteworthy about St. Castor are the trends that the church set for the region, notably the triforium-esque upper galleries that can be seen on churches up and down the Mosel and Lahn rivers.

Of the other churches, St. Florin reflects the older traditions of the Salian Romanesque of the 12th century. This reflects what St. Castor likely would have looked prior to it’s reconstruction in the 13th century, though with a flat wooden roof. The Church of Our Lady, in contrast shows the last gasp of the Romanesque on the Rhine. Though still built according to Romanesque paradigms, the open galleries, pointed arches and realistic foliage ornamentation point to the end of an age.

The remaining pieces of medieval Koblenz point to the increasing importance of the city as a political center. The old castle of the Electors sits unobtrusively on the Mosel and is easily overlooked. Though it survived WWII, the building did not survive post war development and was gutted of its Baroque interior during the 1960s. Just down the street is the Bürresheimer Hof palace on St. Florin’s plaza. This building did not survive WWII, but was reconstructed along with some nearby buildings to preserve one of Koblenz’s oldest cityscapes. Both are buildings from the Renaissance, later expanded, and reflect the changing role of Koblenz, from fortified toll-booth, to a center of power.

In 1629, the Thirty Years War forced Elector Philipp Christoph von Sötern to recognize the practically indefensible location that Trier found itself in. He retreated to Koblenz and began work on a proper residence worthy of his status. Though the capital would officially reside in Trier until the end of the Empire in 1804, Koblenz would serve as the primary seat of administrative authority for the Electorate.

As a result, most of Koblenz’s current cityscape reflects the period of absolutist rule that would become the Baroque. The best example of this is seen in the buildings of the Jesuit-plaza. The church was destroyed in the war but retains it’s late Renaissance façade. The other buildings are all Baroque or historicist. Of particular note is the current town hall which retains the original Baroque entrance hall and staircase of the monastery. This should be accessible during weekday working hours.

As a Catholic theocracy, the symbols of the Counter Reformation were quite important. To this end, the Jesuits introduced and supported the arts in general, and Koblenz became a minor center of artistic production. The only major Baroque church of Koblenz was destroyed in WWII and not rebuilt, and most of the Baroque cityscape has vanished as well.

The exceptions start with the old mint, constructed in 1667 when Koblenz became the primary mint for Trier. Most of the complex was dismantled after the French Revolution but the surviving house is among the few to have survived WWII unscathed.

On the other side of the river you can find the few remaining buildings of the Phillipsburg Palace, which once stretched along the river where the autobahn and railway now run. They were destroyed by accident when Napoleon blew up the castle, triggering a landslide that pushed the buildings into the river.

The surviving Electoral Palace is a rare example of pre-revolutionary neoclassicism in Germany. Built by Elector Clemens Wenceslaus of the Wettin dynasty in 1777, it’s the last Palace built in Trier. Whereas the late Baroque of the Philipsburg Palace combined symbols of Catholicism with absolutist philosophy, the French classicism of Wenceslaus was focused on the connection to the landscape. The palace vestibule is open and allows for direct access from the gardens to the riverfront, with the palace acting as part of the landscape and enhancing it simultaneously.

As a final note, the town of Ehrenbreitstein below the fortress has the largest intact old town in Koblenz and is worth a quick visit. The museum in the old house of Beethoven’s mother has some nice exhibits on life in that period.

With the end of the Holy Roman Empire, Koblenz came into the possession of Prussia. That the strategic location had been unable to resist Napoleon’s advance was taken to heart and the city became the center of a massive fortification system. Of the massive fortifications only five survive and only two are open to the public.

The most well known is the Fortress Ehrenbreitstein, but this was only a small part of defensive network. The largest part was a massive star fort, Feste Kaiser Alexander on the hill to the west of Koblenz. This was dismantled after WWI but the outline can still be seen on Google maps. A small portion, Fort Großfürst Konstantin Alexander has been entirely preserved and sits above the main station.

The fortress was built following the defeat of Napoleon, which saw the ruined castle come under Prussian control. The late classical fortifications were the most extensive undertaken by Prussia. Along with the city fortifications in Ingolstadt and Ulm, together they represent the advances and limitations of military technology in the early 19th century. Unlike Ingolstadt and Ulm, the fortress complex is well preserved and accessible to the public.

The last thing to see in Koblenz is, of course, the German Corner, or the Deutsches Eck. The great statue of Emperor Wilhelm I actually sits on an old bastion of the city’s defenses. Parts of the wall and associated foundations are still visible in the general vicinity.

To make life easier I have attached a list of the main opening hours for Koblenz. Unlike other destinations, Koblenz is a pretty easy city to visit, and in general you do not need to be concerned with when things are open or closed.

Koblenz is cute, charming town with a nice old square and a fantastic fortress above the Rhine. The city itself, however, is not especially worth going far out of your way to see. For those living the area, it makes an excellent afternoon day-trip or for the many different festivals hosted in the city or in the fortress.

One thought on “Travel Guide to Koblenz”