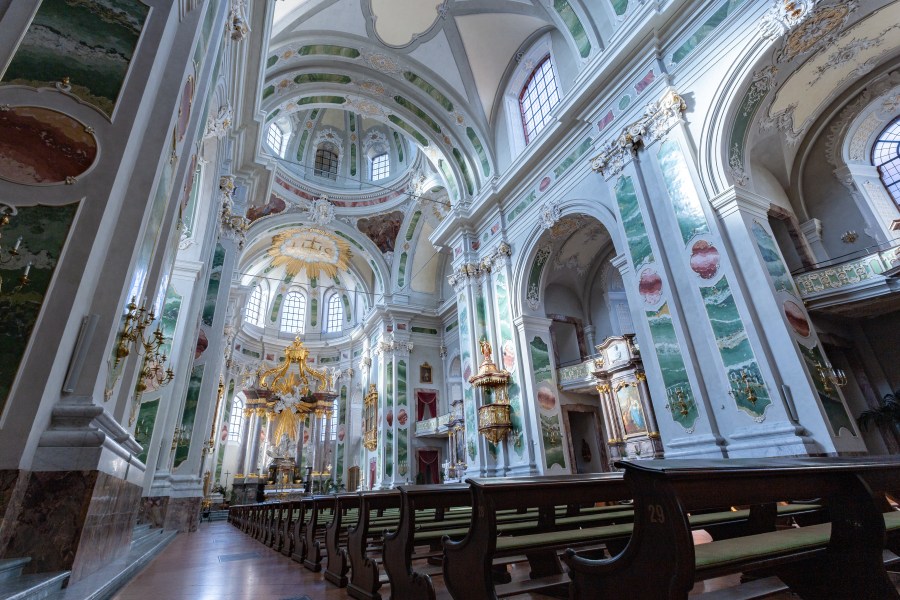 Contents hide
1 The Old Capital of Heidelberg
2 Travel Guide to Heidelberg
3 The New Capital of Mannheim (Optional):
4 Should You Visit Mannheim?
5 The Summer Residence of Schwetzingen
6 The Episcopal Palace of Bruchsal
7 The Town of Speyer (Optional)
8 The Town of Weinheim
9 The old district capital of Mosbach
10 The City of Mainz
11 Travel Guide to Mainz
12 The village of Hochheim
13 The hidden town of Meisenheim:
14 Selected Bibliography
15 Image Credits
16 Return to the Electoral Palatinate
16.1 Electoral Palatinate

The goal of this guide is to take you through the reconstruction of the Rhineland following the devastating War of Palatine Succession which ended in 1697. This war left most of western Germany and the Palatinate in particular, in ruins and had an indelible effect on the political and cultural landscape of the Empire. The focus is on the Baroque architecture of Mannheim Court, with brief excursions to the different styles of Mainz, Meisenheim and Mosbach.

The Old Capital of Heidelberg

Heidelberg may at times feel like a historical theme-park comparable to Venice or Dubrovnik. It possesses one of the nicest old-towns in Germany and sits on the ICE-Line between Paris and Frankfurt, which deposits tourists in the morning for pick-up later in the afternoon. Getting past the tourists is worth an off-season trip, since its deserves the popularity it gets. Once the medieval capital of the County Palatine, Elector of the Holy Roman Emperor, the city owes its ancient grandeur to Emperor Ruprecht III who turned it into a city worthy of an Imperial title. All of this was put to the torch by the French in the War of Palatine Succession in order to prepare the region for future annexation. This was avoided, but the city smoldered for almost nine years as the war devastated the region. Elector Johann Wilhelm initiated the reconstruction in a baroque style, one that favored standardized and minimalist designs. His prototypes still stand as the “Model Houses” on the main market. The reconstruction the Trinity Church would adorn it with the first baroque mansard roof in Germany, and plans were drawn up for a new palace to replace the charred castle ruins. Eventually, political struggles with the surviving residents over the reconstruction plans convinced the Elector that a new capital was needed, and so he started work on the new city of Mannheim.

The New Capital of Mannheim (Optional):

The baroque legacy of Mannheim was long-gone by the time allied bombers reduced the city to ash. The cityscape has been largely renewed with historicist and art nouveau architecture, all of which has also been lost. The main sights to see are a lovingly restored Palace, with its grand hall, chapel and several adjoining rooms rebuilt to their former glory, as well as the Baroque Jesuit Church, completely restored but without the ceiling frescos by the Asam brothers. There are a handful of individual streets and buildings which survived, especially in the Neckarstadt, but none of them from the days of Johann Wilhelm. Its worth a visit if you have time, but will likely be underwhelming.

The Summer Residence of Schwetzingen

To see the baroque legacy of the Mannheim court you have to head to the great palace of Schwetzingen. To save money, the elector built the small-ish palace on the foundations of an older Renaissance hunting palace. In lieu of a sprawling summer palace complex, the electors would build one of the largest Baroque gardens in Europe, complete with “Garden Mosque” (they had different perspectives back then), artificial ruins and sophisticated waterworks. The palace also features the oldest surviving use of wall-paper and a nearly complete inventory. The palace was never definitively finished, as the expense of the Mannheim palace drained the budget for Schwetzingen, so it lack in grandeur, especially in comparison to nearby Ludwigsburg. Definitively worth a visit on a nice summer’s day.

The Episcopal Palace of Bruchsal

The Catholic bishops of Speyer were evicted from the city by its protestant residents after its destruction by the French. Looking for a new seat, the Bishop, Damian von Schönborn, chose the town of Bruchsal. Bruchsal was annihilated in WW2, along with the palace. The reconstruction has been limited to the palace, but the work is much greater in extent than in Mannheim. The architecture combines a wide variety of styles focused on French and Dutch exterior design with the Franconian genius of Balthazar Neumann. Its completely different from what you might expect, having seen in Schwetzingen or Mannheim and is much more similar to architectural styles affiliated with Mainz.

The Town of Speyer (Optional)

In terms of the Baroque, Speyer has a beautiful, but small baroque cityscape centered on the main street leading to the Cathedral. The main sight in this case would be the Trinity Church, a splendid baroque wood-paneled Lutheran church, one of a series made in the early 18th century. Its contemporaries in Frankurt, Heidelberg, and Worms did not survive to the present day and the nearest relative is to be found in lower Silesia, in modern day Poland.

The Town of Weinheim

Weinheim was a small residence town for the Palatine Electors, who resided here while travelling and during the construction of Mannheim. It has a charming center and beautiful views over the Rhenish landscape. I think its fair to say its architecture is stereotypical of the region.

The old district capital of Mosbach

Mosbach was the administrative center for the Palatine holdings on the lower Neckar valley. Its architecture is much more rural and primitive when compared to the great Rhenish cities. Its baroque half-timbered houses evoke an image more typically associated with Germany and reflect older building traditions from the region (These older traditions are the more stereotypical image of Swabian houses, e.g. Tübingen).

The City of Mainz

Mainz would have been the largest center of baroque art in the entire Rhine valley. Although the Schönborn Family had taken up their main residence in Würzburg, Mainz was closer to their ancestral home and would receive a lot of attention from them. This was made easier by the destruction of the French Reunion wars. Although Mainz was spared the total annihilation suffered by other cities in the region, the prolonged siege of the city also necessitated a period of reconstruction. Much of its pre-WWII cityscape reflect this heritage as a baroque residence of the most powerful political entity on the Rhine. Schillerplatz is still ringed by massive palaces of the city elite, and hidden throughout the largely unreconstructed city are remnants of baroque majesty, such as the Dalberg palace and the Landesmuseum.

Despite heavy damage in WWII, the urban planners opted not reconstruct tabula rasa and substantial amounds of the old-town were spared. The city offers the only collection of high-quality Baroque churches in the Rhineland, in St. Peter, St. Ignaz, the Augustine Monastery and the Choir of the Cathedral. In addition, the reconstruction of the market square offers a fantastic glimpse into the dramatic pre-war cityscape of Mainz.

The village of Hochheim

If you’re up for some Rhenish Riesling then stop by at the village of Hochheim. As you head further up the Main, the baroque architecture fades into a more prominent mix of Renaissance and Classicist architecture. Hochheim is the furthest point to which the cityscape is predominantly baroque, and its full of city palaces and illustrious houses. Most noteworthy is the Church of St. Peter and Paul, a simple rococo design with some of the finest Rococo frescos in Germany, comparable with the other Churches of the period in Mainz.

The town of Rüsselsheim would have also been on this list for the same reasons, had it a) not been completely rebuilt in the 1920s by Opel and b) not totally annihilated in WWII. The ruined Renaissance fortress will make an appearance on the page about the Wetterau.

The hidden town of Meisenheim:

The County of Veldenz was a minor state with its capital in the small village of Meisenheim on the Glan River. At the twilight of the Middle Ages, the Counts of Veldenz died out and ownership passed to the now-Counts of Pfalz Zweibrücken, who briefly moved their residence here. During this time it was transformed into a modern residence with a Late-Gothic / Early Renaissance Church to serve as the burial site for the nobility. Shortly after its completion, the Counts moved their capital to Zweibrücken (where they built an even more spectacular church, that unfortunately did not survive WWII). Most of medieval Meisenheim was destroyed by the French, and today it offers a unique glimpse into the Baroque cityscapes of the Palatinate, noteworthy for the almost complete absence of historicist architecture.