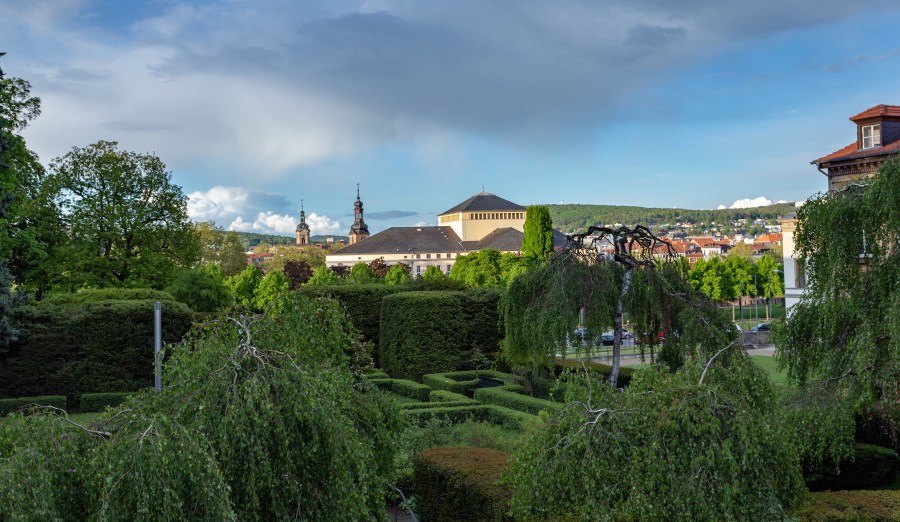 Contents hide
1 The Village of St. Wendel
2 The Rococo Residence of Ottweiler
3 The City of Saarbrücken
4 Travel Guide to Saarbrücken
5 The Castle-Town of Homburg (Optional)
6 The Baroque Residence of Blieskastel (Optional)
7 The Steel Jungle of Völklingen
8 The Natural Landscape around Mettlach
9 Roman Ruins in Nennig (Optional)
10 The Cliff Village of Saarburg
11 Exploring the Mosel Valley
12 Selected Bibliography
13 Image Credits
14 Return to the Saarland
14.1 Saarland

This tour takes you through the main sights in the Saarland. There isnt’t enough surviving for distinct thematic tours without going into excessive detail, so it follows a convenient railroad path along the Blies and Saar Rivers. The emphasis is on the story of the region after its devastation in the Thirty Years War. We start with the main Gothic monument of the region in St. Wendel but quicky move to the Baroque and Rococo cityscapes of the Saar with a visit to the Steelworks of Völklingen.

The Village of St. Wendel

Already by the 10th century, St. Wendel was a major pilgrimage destination. The relics of Saint Wendelinus were a major pull, and by the end of the 13th century, Trier granted the city privileged market rights. The town was devastated by the wars of the 16th and 17th centuries and never recovered. Today, the main sight are the town’s charming atmosphere and spectacular late Gothic basilica. The church shows strong influence from South German Gothic traditions and is the only church of this style in the Saarland. (The region displays an otherwise strong connection to Lorraine.) Despite being plundered on many occasions, it retains a substantial inventory of artifacts from across history.

The Rococo Residence of Ottweiler

The County of Nassau-Saarbrücken had turned Ottweiler into a summer residence, with a spectacular Renaissance palace and planned cityscape. This was all destroyed in the Thirty Years War, and later attempts to rebuild the residence failed to large extent. Eventually, the architect Friedrich Stengel was contracted to build a widow’s residence and summer pavilion on the Blies. The Pavilion with garden has been lovingly restored, and the town itself has the most intact baroque cityscape in the region.

Travel Tip: Both St. Wendel and Ottweiler are on the same train line and are easily visited on the same day with public transport.

The City of Saarbrücken

Despite massive losses in WW2, Saarbrücken still has the the largest and most impressive old-town in the Saarland. From the remnants of the Protestant Cityscape of Friedrich Stengel to the Medieval streets of St. Johann and the the 19th century architecture of the new town, Saarbrücken has the defining atmosphere of the region. Explore the unique Rhenish-Saarland style of the Ludwig’s church, the palace district and the City Church of St. Johann. Then after dinner, the finest prostitutes in Germany.

The Castle-Town of Homburg (Optional)

Homburg was a major residence of the Counts of Nassau-Saarbrücken until the devastation of the Thirty Years War. Following several “succession disputes” involving cannons, the town would fall into the hands of France, who fortified the city under the designs of Vauban. After France was forced to surrender the city, the fortifications were blown up and the town passed to Pfalz-Zweibrücken. Here, they constructed a huge palace complex, which itself would see the torch in the French revolution. Today, the city offers a quant castle/fortress ruin above a mostly baroque cityscape. The city was mostly spared in WW2, but was unfortunately not spared from the 1970s, and so it remains a destination of special interest.

The Baroque Residence of Blieskastel (Optional)

Blieskastel would come into the possession of the Leyen family at the end of the Thirty Years War. In the following centuries it become a small county capital with a palace and a baroque cityscape. French Revolutionary militia would burn the palace and parts of the town and forced the Leyen family into exile. Spared any further destruction the town would not take part in the industrialization of the Saarland and retains its small, but uniform baroque appearance. Without a rail connection, and hidden in the rolling valleys of the Bies river, the town is difficult to reach and is this marked as optional on this tour.

Travel Tip: Blieskastel has a train station accessible from Saarbrücken, however this is somewhat misleading. The station is on a single-track route to Zweibrücken, so the trains run very infrequently. Additionally, the station is quite far from the old town, making an additional trip by bus advisable. This is a destination that is best visited by car, though if you are willing to go for a walk, the Blies Valley is quite beautiful.

The Steel Jungle of Völklingen

The Ironworks of Völklingen were once one of the largest in Europe. Founded in Wilhelmine Germany before WWI, it was not destroyed in WW2 and remained in operation until the late 1980s. The unique combination of industrial landscapes from across the centuries offers a window to the history of technological progress. So unique is the museum that the UNESCO committee declared it one of Germany’s first World Heritage sites. Nowhere else in the world can you disappear to such a well maintained and intact jungle of steel.

The Natural Landscape around Mettlach

The Saarschleife is a large horseshoe bend cutting through the Palatine Highlands. An observation platform at the peak of the bend offers spectacular vistas of the Saar Valley. Mettlach itself is a center for porcelain production and is the old center of Villeroy and Bosch, who still have a factory and outlet store in the old Benedictine Monastery. The dense forests of the Saar valley surrounding Mettlach are a departure from the Industrialized region around Saarbrücken and offer many days of hiking and things to see.

Roman ruins worth visiting are rare in Germany, and Nennig probably isn’t worth it. Its claim to fame is the largest intact mosaic north of the Alps, found within the walls of Villa Rustica. The town itself is located in the picturesque landscape of Luxembourg, but unfortunately, most of town and surrounding areas were destroyed in WWII in the follow up to the failed German Ardennes Offensive.

The Cliff Village of Saarburg

A castle built by the Prince-Archbishop Electors of Trier once guarded the strategic crossing point on the Saar. Now its a picturesque village sited on a cliff with a small stream carving a path through the town. It has one of the most iconic scenes in Germany, but otherwise has little to offer. It is however, a great place to end the tour of the Saarland. From here its just a short train ride to the City of Trier and the Mosel Valley.

For more information on the Mosel Valley, see the guide below: