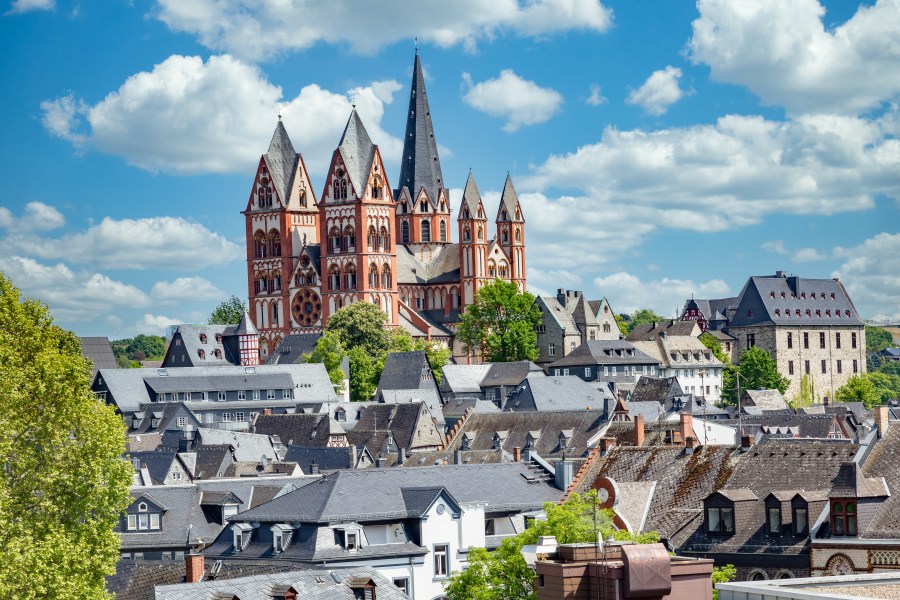 The Westerwald is a heavily forested highland region that hugs the right bank of the Rhine Valley as it cuts through a series of small mountain ranges. To a large extent unsuitable for agriculture, the region did not develop instep with nearby regions, leaving a heritage of medieval towns, castles, and monasteries. The crown jewel is the town of Limburg an der Lahn, one of the best-preserved medieval town centers in Germany.

The heart of the Westerwald is the river Lahn which binds it directly to the outside world. The river not just connects these remote woodlands to the metropolitan Rhineland but also brings the bounty of the Rhine to the interior of Germany. The consequence is an undisturbed region that witnessed some of the most incredible transfers of knowledge in European history.

What is the Westerwald?

As a geographic feature, the Westerwald is actually a fairly small forested area that I have expanded to encompass a broader historical narrative. The actual region encompasses just one portion of the Rhine Massiv, which can be vaguely described as a “mountain range”. To the actual Westerwald, I have also included the southern portion of the Rhenisch Massif, i.e. the Taunus Mountains, and the Lahn Valley up to Wetzlar. Together, these regions form most of the Rhine Massiv on the Right Bank.

The expanse of the region happens also conveniently encapsulates the historical domains of the one noble family, in particular, the Nassau Dynasty. So great was the Nassau domain, that it once extended even further north into Westphalia. The Westphalian lands were however lost to Prussia after the Napoleonic Wars. The borders of the Westerwald in this article thus reflect the main areas under Nassau rule after the Congress of Vienna in 1815.

In the more distant past, the Westerwald was a remote and somewhat impenetrable region. An analysis of place-names suggests that the original Germanic inhabitants resisted Frankish rule and Christianity long after surrounding regions had been subjugated. This task was given over to the Prince-Archbishops of Trier who constructed a series of inspiring cathedral-like Monasteries to reinforce their symbolic authority over the region. The Nassau Family, starting from the lowly castle of Nassau, would ascent to the highest ranks of the Holy Roman Nobility by the end of the Middle Ages. In this forest, they built a platform that would see the family dominate European politics for centuries, and even today, the family still rules in the Netherlands and Luxembourg.

At the end of the 19th century, the Nassau family moved their seat out of the remote forests of the Westerwald to Wiesbaden. This city was located in the metropolitan region of the Rhine-Main area. Though money was invested in developing the mineral wealth of the region, it failed to witness anything like the industrialization of similar regions like the Wupper and Sieg Valleys to the North. This has given us today, a region largely spared the most destructive forces of the 19th and 20th centuries.

There are two predominant themes that might guide an exploration of the Westerwald. In the first place, we have the remarkably well preserved Medieval heritage of the region. This is best exemplified by the town of Limburg, but also by the many castles and monasteries that dominate the Lahn valley. The second narrative is that of the Nassau family, covering their rise from local to global nobility. The journey starts with the small and unassuming Nassau Castle and ends with the resplendent 19th-century residence in the heart of Wiesbaden. It’s rare that such a story can be told so easily within one region.

Below I outline two curated itineraries for exploring the Westerwald along the lines of a thematic narrative.

Lands of the Westerwald

The story of the Westerwald can be told broadly in two parts, the period of the Holy Roman Empire and then the region’s industrialization under the Nassau Dominion. When the ancient Roman Empire surrendered its forward frontier, the Limes, and retreated to the Rhine, the region was largely unpopulated. Later Frankish settlement would progress only slowly, and organized colonization of the area ended only around 1300 ce. Its remoteness and overall rugged terrain would impede development and today remains known mostly for its many beautiful towns and villages.

A Light in Darkness

The Westerwald and its strategic value were not lost on the emergent Holy Roman Empire. Missions were undertaken as early as the 10th century to Christianize the region and bring it under direct control. The Imperial Conradine Dynasty built the first permanent settlement in Limburg. Later the Prince Archbishops of Trier were given the task of converting the Lahn Valley and the Westerwald. Over time, the region splintered into a myriad of minor noble estates, such as those around Nassau, Diez, Weilburg, and Solms, which today still mark the region with castles and palaces.

The most remarkable monument to this early period of Holy Roman settlement is the town of Limburg on the Lahn, which even today remains one of the best-preserved fully medieval old towns in Germany. Though ruled by a cadet branch of the Isenburg Family, the town itself was nominally controlled by the Emperor himself. Much of the city’s wealth came from the tolls it exercised on, what was for many centuries, the only stone bridge over the river Lahn. These tolls would be raised in some form until the end of the German Empire in 1918. Today, the small old town possesses some of the best-preserved medieval streets and squares in Germany. The old Fish Market is surrounded entirely by buildings dating to the 13th century.

The Free and Imperial City of Wetzlar is one of the more interesting relics of the old Empire. After Louis XIV burned much of the Palatinate to the ground in the War of the Palatine Succession, the old Imperial Court of Appeals in Speyer found itself a smoldering ruin. The court was subsequently moved to the small village of Wetzlar, something of a strategic move by the Habsburg Family. This had the effect of elevating the Imperial Court in Vienna and leaving cases under the jurisdiction of Wetzlar to be somewhat less prestigious. Nevertheless, the court would adjudicate disputes between states of the Holy Roman Empire until its dissolution in 1804. This ensured that this small town maintained a wealthy middle class of judges, lawyers, and lobbyists, and this wealth is still evident today in the town’s rich architectural history.

The Nassau Family would build itself up over the span of several centuries to become the largest secular authority in the region. They eventually competed with the Archbishops of Trier and the Landgraves Hessen on either side. After 1355, the largest Nassau capital would move to the small town of Weilburg, situated high above the Lahn. By 1700, it was transformed into a baroque planned city complete with a modern palace and garden complex. Over time though, the Nassau family splintered, and dynastic branches split off and included branch families based in Diez, Herborn, Dillingen, Hadamar, Beilstein, Usingen, and Nassau. In each of these locations except Usingen, you can find a castle or a palace of the Nassau Family. This list adds to their many other seats in Wiesbaden, Siegen, Saarbrücken, and Amsterdam.

From the end of the Napoleonic Period, until the Nassau State was annexed into Prussia in 1866, the region would witness something of a golden age. Many of the towns experienced rapid industrialization as a result of various rich iron and coal deposits. The best examples from this period are Dillenburg, Herborn, and Diez. Many of the magnates of the region would go on to upgrade their residences in the historicist style similar to Neuschwanstein, including those in Weilburg, Schaumburg, and Braunfels.

By far the best example of the Nassau family’s prestige is the Spa town of Bad Ems. Already a favorite destination of the Holy Roman elite, it also became a favored destination of the Prussian King, and later German Emperor Kaiser Wilhelm I. It was from here that the famous Ems Telegram would be sent, starting the Franco-Prussian War.

Marble, which had been carved from the cliffs above the Lahn since Roman times, became the region’s most valuable export as its extraction and transport became industrialized. From the Cathedral of Berlin to the Moscow Subway, Lahn Marble was exported across Europe. In Bad Ems, they built an entire building from it, as an exquisite display of wealth for the Nassau Family.

The Westerwald is a beautiful region full of small villages of Half-timbered houses and soaring medieval cathedrals. What it lacks in urban scale it makes up for in immersion into the historical context that has been so carefully preserved. In Wezlar’s many museums you can experience life at the beginning of the 19th century, and discover its visual culture. Weilburg lets you glimpse into the lives of the Nassau Lords who ruled over the Lahn valley. And as you cross the ancient stone bridge into Limburg, you will share the same view as a trader making the same journey 200 years ago. There are many other stories of the past that Westerwald is waiting to immerse you in.