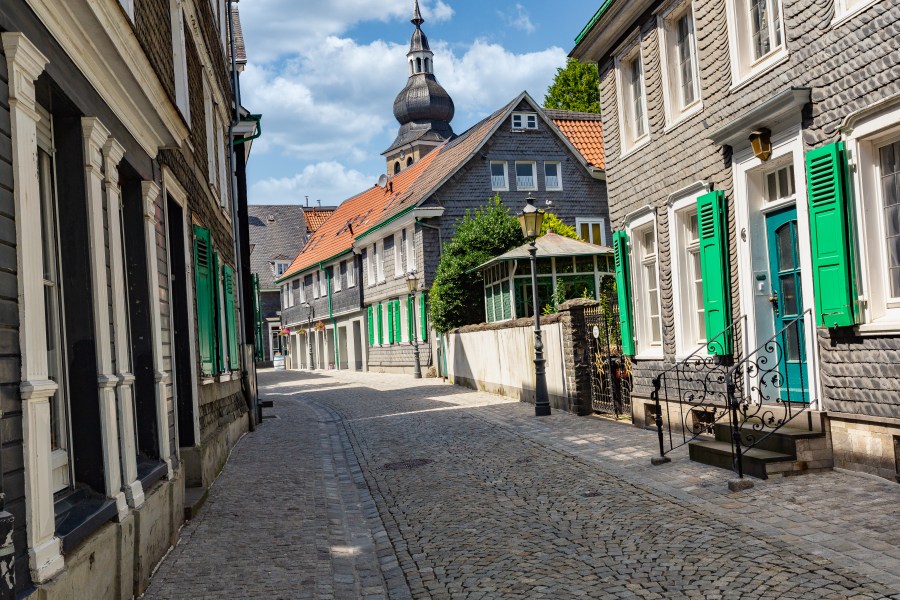 Traveling East on the ancient road from Cologne, the landscape transforms from the flat and fertile plans of the Rhine into dense and rugged woodland. This mountainous woodland landscape deterred first the ancient Romans and later Germanic settlers who preferred to live off the bounty of the Rhine. A trickle of settlers to the region discovered a land rich in iron and coal deposits. By the late Middle Ages, it was a center of iron and steel production. Absent from the history books until the Industrial Revolution, the Bergisches Land would then see its golden age. Its mines would power Germany’s rise as a great power. This pursuit of power would transform the remote woodlands into a showcase of human ingenuity.

What is the Bergisches Land

Centered on the city of Solingen, it formed the core of the political entity known as the County, and later Duchy, of Berg. Originally ruled from a castle in Altenberg, where today a great Monastery stands, the capital moved to Burg and eventually to the Rhine in the city of Düsseldorf. The region today is known for its pastoral landscapes and small villages of slate-covered homes. It has a rich culture and local identity, which extends to the realm of food and drink. You can wake up in the morning with a traditional Bergisches coffee service, overlooking a meadow of wildflowers. For lunch, after a hike along the Wupper Valley, enjoy local Krüstchen port chop and relax in the evening with a regional waffle and ice cream. So where should you go in this region?

The great cities and factories of the Bergisches Land were annihilated during the Second World War. Only fragments of the great cities in Wuppertal, Remscheid, and Solingen survived. However, in contrast to the utter devastation of the Rhineland, many towns and villages hidden in the highlands survived. It’s in these cultural landscapes of natural beauty and ancient villages that this region is at its most beautiful.

My top three destinations are Lennep, Burg Castle, and Altenberg Monastery, all of which evoke an image of the region’s pre-industrial past. Dense natural landscapes and rural atmosphere have long made the region a popular holiday destination. Coming from the concrete jungles of the Rhineland, workers and their families could escape to nature here. The core of the region is also in a day-trip range of the major Rhenish urban centers, particularly Düsseldorf and Cologne. So it’s also easy to visit as a tourist to the Rhineland. But if you wanted to see the region in more depth, where do you get started?

The old duchy of Berg has a diverse landscape ranging from dynamic 20th-century cityscapes and timeless villages to lost mines hidden in primeval forests. In coming up with possible travel itineraries through the region, my two approaches highlight the region’s pastoral character. With its countless villages and castles, it’s easy to get lost in time.

The first trip starts in the old town of Lennep, today a suburb of the city of Remscheid. Though Remscheid was annihilated in the war, Lennep survives as one of the main cultural centers of Berg. From here you can take trips out to the many other villages and cultural landscapes in the region. In particular, the villages of Gräfenrath and Hückeswagen really stand out as emblematic of Berg. Far to the South in the Bergisches Land Nature Reserve lies the village of Blankenberg on the Sieg River. With a car, you can see some of the best landscapes the region has to offer.

The second trip focuses on the historical court of Berg and starts in Düsseldorf. From there you can head to Gräfenrath and the Klingenmuseum which presents a history of ironworking and in particular knife making in the region. It was this industry that propelled Solingen and the rest of Berg up the economic ladder in the early modern period. The industrial wealth of the region is on display right next door in the town of Vohwinkel, where you can catch the Schwebebahn elevated railway up the entire length of Wuppertal city. For a glimpse into the medieval past, you will have to visit the spectacular Altenberg Monastery, built as a grand sepulchral monument for the Counts of Berg. From there you can see Burg Castle and the Müngstener Bridge, both monuments of the 19th century, celebrating the industrial revolution and the romanticization of the region’s history.

To plan your own trip, it may make sense to start at the definition of the Duchy Berg

Traditional Foods of the Bergisches Land

The people of Berg worked hard and needed a diet rich in protein. Along the way came into their own culinary traditions. Here I outline some of the most traditional things you can eat in this part of Germany.

The Lands of the Duchy Berg

In contrast to the historical County/Duchy of Berg, my region excludes the Rhine valley on my map. This region, especially on the right bank of the Rhine, around the cities of Leverkusen and Düsseldorf, is heavily industrialized. Their history diverged substantially with the interior of the County Berg by the dawn of the Industrial Revolution. There is a Wikipedia article outlining whether or not certain municipalities belong to the Bergishes Land, either from historical provenance or from popular conception. It’s interesting to see that for the most part, the people of the cosmopolitan Rhine Valley do not see themselves as belonging to this region.

My conception of the region is comprised more generally of three smaller distinctive subregions, based on the connectivity to the Rhineland:

The bulk of the population lives in the region around the vicinity of the old ducal capital of Düsseldorf. Easily reached by urban transit from Düsseldorf, Solingen and Wuppertal form a smaller urban core surrounded by villages and castles. High on my list to visit is the charming village of Gräfenrath, which is home to the Klingenberg knife and sword museum. To the south on the Wupper River is the mighty Castle of Burg and the towering steel Müngstener Bridge, standing next to each other but from opposite ends of history.

Perhaps the most beautiful parts of the Bergisches Land were the parts not actually under the rule of the Dukes of Berg. The counts of Hückeswagen controlled several minor villages and castles in the hilly highlands of the interior. The capital of Hückeswagen stereotypes the region with its quaint central boulevard and slate-covered homes adorned with green shutters. The nearby villages of Wipperfürth and Radeformwald follow suit. For a deeper dive into the past, the Open-Air museum in Lindlar offers a window into the pre-industrial past.

Finally, the parts of the Bergisches Land in the south were controlled by the Prince-Archbishops of Cologne until the region fell under Prussian rule. The urban portion of this subregion was heavily bombarded during the Rhine crossing in the Second World War and is not especially rich in tourist destinations. The once resplendent monastery of Siegburg was reconstructed only partially

The reason to visit this part of Berg is the stunning natural beauty of the Sieg River as it snakes its way to the east. The castles and villages of this area form part of the Bergisches Land Nature Reserve, which encompasses most of the southern region on the map.

The lands of Berg should appeal to those who are interested in the cultural landscapes of Europe. It offers a fairly uncommon combination of pastoral atmosphere, rich historical heritage, and regional identity. In contrast to the many other sparsely populated woodlands of Germany, the proximity to the major urban centers of the Rhine and the richness of the local culture make this an excellent destination even for first-time visitors to Germany.