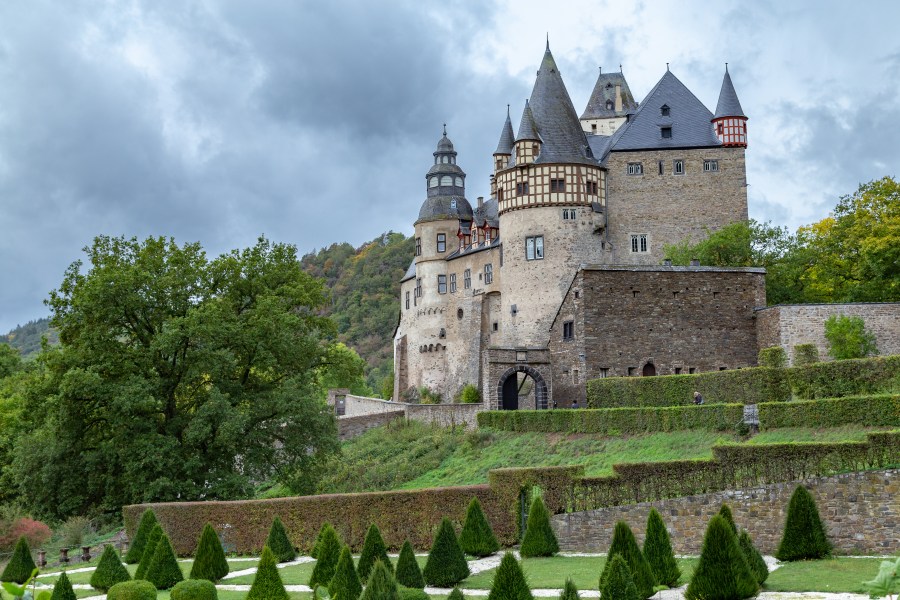 A land of ruined castles, dark forests and hidden glades, the Mosel Valley is a mysterious corner of Germany. That may seem odd given that the river itself is one of the largest tourist attractions in the country. The Eltz Castle alone ranks in the top ten most frequented landmarks in the country, not to mention Trier. Go beyond the river valley itself, and the forests of the Hunsrück and Eifel conceal a wealth of beauty and mystery waiting to be uncovered.

The Mosel region, with its portion of the Hunsrück and Eifel is filled with castle ruins, rolling hills and hidden villages. Sparsely populated and lacking in infrastructure, towns in different corners can seem to be worlds apart (See below on how to travel around the region). My division of the region is based roughly on the Mosel parts of the Prince-Archbishop Electorate of Trier, which extends North to the Prum Monastery and to the South includes the unpopulated forests of the Hunsrück.

Geographically this region has three parts:

So where did all those ruined castles come from?

As with most of the west-bank of the Rhine, the region was repeatedly devastated by invading armies (mostly the French). In this case, the devastation took place primarily in the Thirty Years’ War and the War of Palatine Succession, which saw the French systematically blow up every single castle except for two: the Eltz and Bürresheim castles. The Electors of Trier, who had built many castles and palaces across their territory would loose virtually all of them to the French. Of the significant estates, only the Trier and Malberg Palaces would survive on the West Bank.

World War II would also take a toll on the region. The town of Bitburg was annihilated, and resplendent Prüm Abbey reduced to ash. Trier would see about 60% of its building stock destroyed, and over 95% of Mayen. Countless castles and villages would be destroyed as the front line moved towards the Rhine. However, much of Trier would be rebuilt, and many of the castles would be restored. The region retains its romantic charm, full of ruins of by-gone eras and quiet villages where time seems to slow.

The architecture of the region can be grouped into a variety of categories:

One of the distinctive features of the architecture from this region is the black Basalt that forms the basis for many buildings. Whereas on the Rhine, red sand-stone or blue-gray trachyte could be shipped from distant quarries by boat, the great buildings of Mosel and Eifel are black with local basalt. Even in modern construction, the use of Basalt continues to be a defining feature.

As to how you should travel through the region, of course not everything on the map is equivalent in interest. However, the most interesting destinations may be quite spread out and not necessarily convenient to reach. Here are some suggestions on how I would want to experience the Mosel valley.

The sweeping visas and ancient castles of the Mosel Valley are among the most iconic images of Germany. I suspect that the top destinations will not come as a surprise to many, as their pictures adorn books and google searches for Germany. This short list help you decide what places are worth visiting on the…

Culinary Overview of the Mosel Valley

Thematic Tours of the Mosel Valley

The black lines follow my suggested route, the dotted lines and yellow dots are optional and the white ones are special interest destinations.

How to Travel on the Mosel

Known for its sweeping vistas, dramatic castles and superior Riesling wine, the entire length of the Mosel Valley is full of things to see and do. However, getting to these places can pose a serious challenge, since the railway is quite limited.

The Elector of Trier

Follow in the footsteps of the Elector at the height of his power. The tour starts in the fortress city of Koblenz and follows an old trade route to the ancient gates of Trier. The valley is dotted with castles and church spires built by the Elector as a show of power.

The Mosel Romanesque isn’t really a style in the sense that Rhenish Romanesque is. If anything the Mosel is characterized by both the embrace and the rejection of the Romanesque, reflecting its connection with other cities in Europe. This guide takes you on a short, if not somewhat eclectic, journey to the most interesting landmarks…

The Best Castles of the Mosel

The castles of the Mosel and Eifel have a different charm than the those of the more famous Middle Rhine valley. Untouched either as ruins or frozen in time, the Mosel has the most interesting castles in Germany. Here I describe the ones I feel most worthy of a visit.

With his lands devastated by the War of Palatine Succession, the Archbishop invested the massive power and wealth of the Schönborn family into the reconstruction. This guide you through the Baroque symbols of absolutist and ecclesiastical power.

The only notably city in the region is Trier, and it might be fairly generous to consider it a city. Below are the guides to both Koblenz and Trier since they feature prominently in the history and culture of the Mosel Valley.

For more pictures of the many places to see here, head over to my gallery of the region: The Mosel Valley

One thought on “Exploring the Mosel Valley”