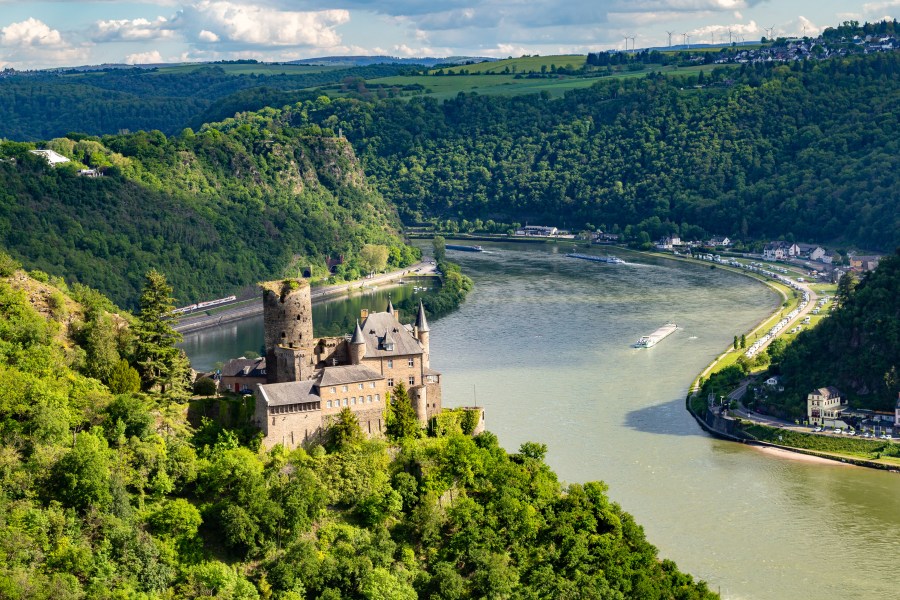 The Middle Rhine valley is perhaps best known for its river cruise. From the boat you can see the many castles and spires of the the Middle-Rhine Valley from a distance. However, there’s much more to explore in depth. This is a small but culturally rich region, with timeless villages, mysterious ruins and an inspiring landscape. Each castle in the valley has its own story to tell. My take on the Middle-Rhine is a fairly standard one, but includes both the UNESCO designated upper-half and the less-traveled lower half.

What is the Middle-Rhine Valley?

The Middle Rhine region is a river gorge carved out as it travels through two ancient low-lying mountain ranges. The rugged terrain on either side of the river ensured the valley’s relative isolation and forced many pan-European trading networks to squeeze through a single passage. The wealth of the Rhine valley in the Middle Ages meant it became a flash point for politics and ideology, reflected in exuberant construction of castles and churches.

Consequently, war and strife carved the valley into a checkerboard of claims by the numerous principalities desiring the lucrative tolls. Messianic prophets and reformist monks preached to the urban masses. Isolated in the steep valleys, some towns even sought and fought for independence from the incessant bickering by the great powers. Despite the external forces shaping the politics of the region, the river itself ultimately defined the culture and architecture of the region.

Heritage of the Rhine

The terminology upper, lower and middle can be a bit confusing when looking at a map. Upper vs lower, should be taken literally in this case, as the Upper Rhine flows from the Alps and the Lower Rhine into the North Sea. The Middle Rhine sits in the mountainous point between the two.

Starting in the south near Mainz the Upper-Rhine flows into the first half of the Middle Rhine. Here the architecture still bears the distinctive red sandstone that is so easily find in the south of Germany. As you travel north, already by the time you reach Boppard, the stone has turned grey from northern Trachyte sandstone, and sometimes even black from Eifel Basalt. Continue North and the cozy baroque of South Germany, with its Mansard roofs and exuberant forms fades into the austere timber frame buildings of the North with their green shutters and square roofs. When you float past Bonn, the flat plains of the Lower-Rhine open in front of you, and the Middle-Rhine has come to an end.

There are quite a few towns, villages and castles worth visiting. The wealth of heritage preserved in the valley marks it out from the rest of Germany, only perhaps the Upper-Danube offers as much as the Middle-Rhine. The center of the region is Koblenz, to the North are the culturally North-Rhenish towns once controlled largely by Cologne. To the South of Koblenz are larger settlements that often vied for independence and whose wealth made the region a magnet for conflict.

Personally, I categorize the places to see by the architectural characteristics of the surviving heritage. This can be done on several different axes:

This is a unique style that is also shared with the lower stretch of the Lahn valley, and is defined by the Staufen-Romanesque gallery-basilica churches in every town. Inspired originally by St. Ursula in Cologne, the style was repeated in St. Johannis in Lahnstein and St. Castor in Koblenz, from where is spread up and down the valley. This style reached its peak with the Cathedral in Limburg (though mostly of French inspiration), Andernach and Boppard.

This is a style mostly defined by its eclecticism rather than its uniformity. Unlike the Romanesque, the Gothic styles appear to have been imported from Cologne and Trier. In the upper half, the Gothic churches in Bingen, Lorch and Boppard share some characteristics with those also seen in Cologne and Mainz. The exception is the Church of our Lady in Oberwesel, a truly unique building which appears to unite traditional French forms with the austerity of the mendicant orders (e.g. focus on the vertical axis but no triforium). In the Northern half, the Mennorite Church in Andernach closely resembles its relatives in Bonn and Cologne.

A North-South Divide – The Baroque

The lower half of the valley is rich in Baroque half-timbered architecture. The towns of Unkel, Erpel and Linz are spectacular examples of this style and fit into the category of “fairy tale village”. These are heavily influence by styles in the Lower-Rhineland, especially from Mark and the Sauerland. In the upper half, we have the Palace of Engers and the Remnants of the Palaces in Koblenz, all designed and built with the strong residual influence of the South German master, Balthazar Neumann. Even further south the influence of Mainz and the Palatinate are felt more acutely.

There are only a handful of interesting and untouched ruins in the Rhineland, and there are only two castles that were never destroyed at all. The latter are the Marksburg and Pfalzgrafenstein, both prominent examples of Romanesque and Gothic castle construction respectively. Of the ruins, the most interesting is the Fortress of Rheinfels in St. Goar, the original “Watch on the Rhine” which stopped the armies of Louis XIV but was eventually blown up by Napoleon.

After centuries of division, the unification of Germany brought attention to its common heritage. Many of the castles on the Rhine were “rebuilt” to save them and restore their beauty. There are many restored castles on the Rhine and most are in private ownership or not especially interesting. The most interesting are the Drachenburg Palace, Arenfels Palace and Stolzenfels Palace.

A Heritage of Discord

The reason for the the simultaneous unity and discord comes down to the politics of the time. In the early middle ages, the political struggle between the Emperor, who was dominant in the cities of the South and the Church having dominance in Cologne, defined the development of Romanesque. The Gothic was a style of civic pride, and reflects the unique characteristics of its time a place. The Baroque styles dominated in the period of reconstruction following the wars of religion and French scorched earth. This style was often dictated from above, and could very from county to county.

There are a lot of things to see in the Middle-Rhine and so choosing may require deciding what kind of things you want to see. I’ve put together some guides focused on the architecture and history of the region.

Culinary Overview of the Middle-Rhine

Thematic Tours of the Middle-Rhine

In a valley of epic looking castles, which ones are worth visiting, and which are best looked at from a distance? This guide will take you through the castles and ruins that I think are worth getting off the boat for.

Simply a list of the best places to visit for a glass of Riesling on a warm late summers evening. Featured here is old-world atmosphere and occasionally sweeping vistas.

For centuries after Charlemagne built his capital in Aachen, Emperors of the Holy Roman Empire would pilgrimage to the city. With this guide, travel in the footsteps of Germany’s greatest medieval Emperors on the Imperial road between Frankfurt and Aachen.

Explore the surviving legacy of the Age of Absolutism. Once upon a time, great palaces, churches and cityscapes dominated the landscape, but since then, have slowly faded away. This guide aims to explore what’s left of Absolutist and Enlightenment ideals in the Valley.

For more pictures of the many places to see here, head over to my gallery of the region: The Middle-Rhine Valley