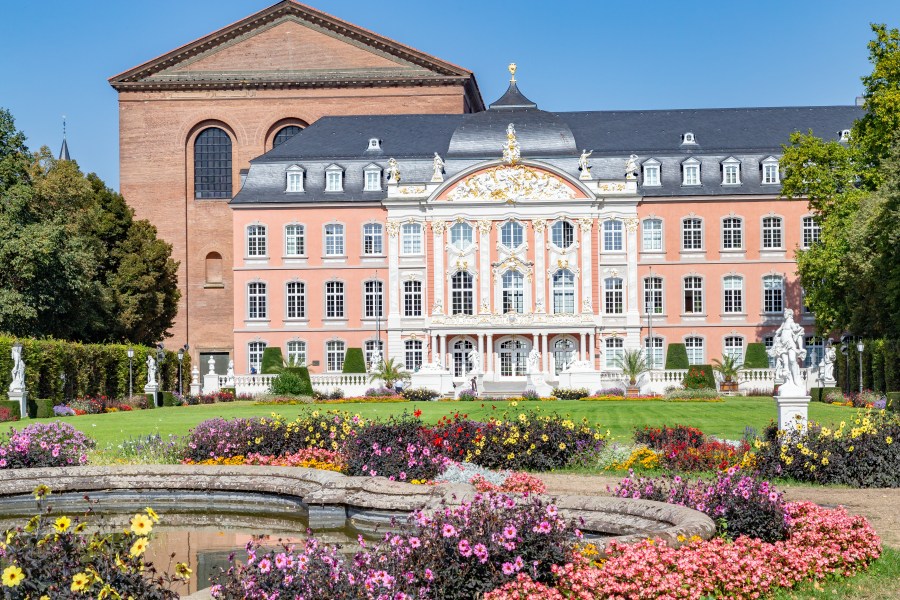 The Electorate of Trier ought be best known for its contributions to the Baroque, even if little survives of this effort. With the region devastated by the War of Palatine Succession, the Archbishop Franz Georg von Schönborn invested the massive power and wealth of the Schönborn family into rebuilding his state. This guide you through the reconstruction of the Mosel Valley in the Baroque period.

The Residence of the Archbishops in Trier

The city of Trier sits in a narrow valley at the edge of the German speaking world. The lack of any strategic depth standing between the Electors and their enemies became quickly apparent in the Thirty Years War, and the capital was moved to Koblenz. The Renaissance palace in Trier would remain in occasional use until Trier again became an official residence under Archbishop Johann Philipp von Walderdorff.

In 1756 he invited architects of the Würzburg School (i.e. Balthazar Neumann) under court architect Johannes Seiz to turn the palace into a Rococo masterpiece. Unfortunately for us, most of the palace was dismantled by Napoleon and later by the Prussians under various urban renewal guises. Only the south wing (pictured) was retained due to the spectacular Rococo Staircase and main Hall. In a somewhat fortuitous outcome, this was also the only part of the palace to survive WWII, but unfortunately remains closed to the public.

Well by 1756 Neumann was long dead, but when he arrived to the Schönborn court in 1734, it was a momentous occasion. He was considered a legendary artisan even in his own lifetime. Neumann was the court architect of the Schönborn Bishops in Würzburg-Mainz, the wealthiest political entity in the Empire during this time. He was effectively rented out on occasion to friends and extended family of the main court and in Trier he is most known for the spectacular church of St. Paulinus, even though he contributed very little to its design. We owe the interior to the aforementioned Johannes Seiz and another Schönborn court painter Christoph Thomas Scheffler.

The Palace of Malberg

The seat of the Malberg family was actually purchased from Trier in the 14th century and remained the center of a minor principality until its destruction in the War of Palatine Succession. In 1704, a minor clerical office in the Archbishop of Cologne purchased the palace and began construction on a Baroque residence. In contrast to the famous architects active in Trier, this palace was designed by Christian Kretzschmar from the Saarland. He is also responsible for the Baroque monastery in Mettlach. (Which is still there, it now produces porcelain for Villeroy and Boch). A handful of rooms appear to have been preserved and can be visited via somewhat irregular tours or by request. However, the gardens and forest around the palace complex are beautiful and representative of a rural residence of this time.

The Prüm Abbey is one of the oldest in Europe, founded in 762, even before Charlemagne was crowned Emperor in Aachen. It was also one of the wealthiest and greatest endowed. However, secular decline had left the institution under perpetual mismanagement. By 1379 Trier launched an effort to annex the Monastery and its lands. The monks were not interested in this, and resisted with force. They finally capitulated after a long war with the Electors of Trier in 1576.

The Abbey then became a source of pride and personal project for many of Trier’s archbishops. In particular, Archbishop Franz Georg von Schönborn. He tasked Balthazar Neumann and his own court architects with rebuilding the monastery to be worthy of its history. The result was spectacular, and unfortunately did not survive. Most of the complex was looted by the French and the monastery was largely turned into Ash during the Ardenne Offensives in WWII. A slow reconstruction effort has continued since then. Tough it is only a shadow of its former self, it is one of the pinnacles of the Baroque in the region.

Bollendorf is a small inaccessible village on the border with Luxembourg with both a late Renaissance palace and a small Baroque palace built by minor nobility in the 18th century. If you have a car, it might be worth driving through, as at the very least, the landscape should be worth the trip. The Monastery of Echternach is right across the border in Luxembourg and is worth mentioning for its baroque cityscape, even though it suffered a similar (if much less severe) fate to that of Prüm.

The reconstruction of the Mosel was not just dictated from the top in the form of palaces and churches. Contrary to the reconstruction of Heidelberg, the small towns of the region were rebuilt ad hoc using their own means. This takes the form of the lower-cost half-timbered constructions that adorn towns such as Bernkastel. Although we associate half-timbered buildings with the middle ages, almost none of them from this time period have survived, and most are from the 18th and 19th centuries. During the 19th and 20th centuries, the wooden frames were often covered in plaster to make maintenance easier. The wooden frames have generally only become visible during the course of the post-war period, which is why you almost never see half-timbered buildings in old pictures.

Wittlich is another small, charming town like Bernkastel, but is some distance away from the Mosel. It has a collection of more prominent civic buildings from the Baroque period and is less influenced by the styles of historicism than in Bernkastel. The town itself is fairly underwhelming and this only recommended for a brief visit.

All that survives of the massive Baroque Philippsburg Palace complex of the Trierian Archbishops is a collection of auxiliary buildings beneath the Fortress of Ehrenbreitstein. The palace remnants and the village next to it were spared the total annihilation of Koblenz in WWII, and are something of an unexpected gem in city.

The Bürresheim Palace is not strictly baroque, but most of the interior structure dates from the period following the War of Palatine Succession in 1697. At that time it was owned by the Eltz family, whose head happened to be a Marshal of the invading French army. Thus his request to have his estates spared destruction were granted. Later sales and succession disputes would see Bürresheim divided into separate quarters for four families. At its peak almost 80 family members were residing there. The special feature of Bürresheim is a complete and original inventory of furniture and decorations. Unlike Burg Eltz, most of the interiors are in the Baroque style with corresponding furniture. As a result, it is one of the most recommended destinations on this tour.

The Rococo Palace in Engers sits on the Right bank of the Rhine, and was thus spared destruction by Napoleon. It is the only surviving Palace of the Archbishop of Trier with any significant amount of preserved interior. The highlight is the Hall of Diana, a typical work of the Rococo, dedicated to court hunting scenes. It was also built by court architect Johannes Seiz but the Bishop never got a chance to live here. His state would be dissolved by Napoleon before he got the chance to move in. This building is discussed in more detail on the page about the Middle-Rhine valley.