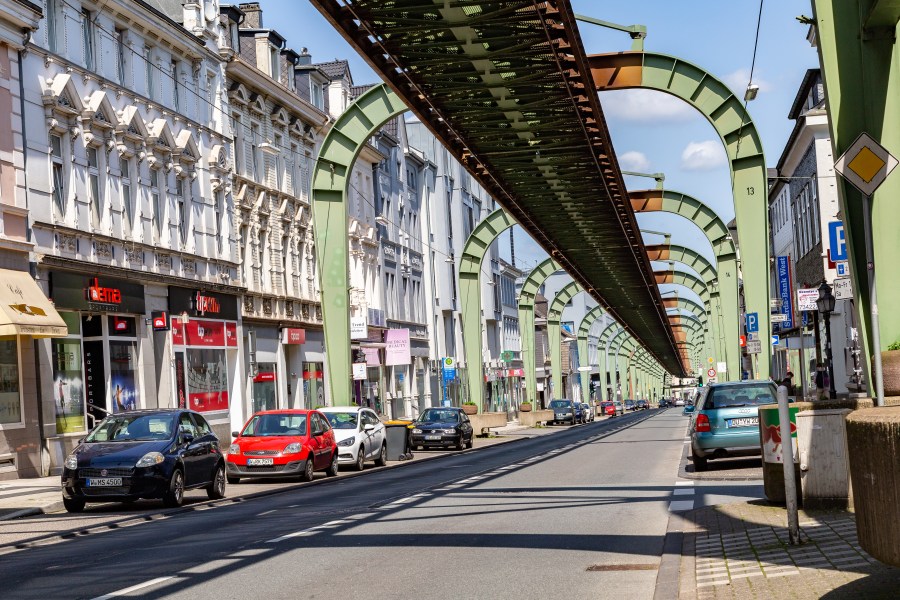 As with the early mill towns of England, it was the waters of the Wupper that powered some of Germany’s first industrial manufacturing facilities. The entire river valley quickly urbanized around the main centers in Barmen and Elberfeld, but by the end of the 19th century, it had extended the full length of the river. As one of Germany’s most important industrial centers, it was completely destroyed by allied bombing in 1943. However, in contrast to the lowland cities on the Rhine, the mountainous valley and hills spared much of the city from destruction. Reaching these parts, however, is perhaps just as interesting as the destination.

Perhaps the most interesting to see or do in the city is the Schwebebahn. It’s an elevated railway that travels above the river Wupper and gives you a panoramic view of the entire city. It looks incredibly steampunk, and with an advanced ticket, you can even travel the length of the railroad on one of the original cars from 1905.

The architecture of the preserved old town is dominated by the tenement homes of the working and middle-classes from the end of the 19th century. The style is often referred to somewhat broadly as Gründerzeit style or the “Age of the Founders”. This refers to the founders of the German Empire, which was created in 1871. The syle itself is actually a composite of various historicist movements that extend into the 1910s. More indicative of the style than the buildings is the urban planning of the period. Typically focused around geometric street layouts and plazas, they were built quickly and many were centrally planned. What makes the avenues of the Wuppertal unique, is their adaptation to the hilly landscape of the valley. Roads make sudden turns, can end abruptly in cul-de-sacs, or straight avenues can bob up-and-down with the valleys.

Depending on your interest in historicist architecture, a deeper dive into the city of Wuppertal may not be worth it. If nothing else, however, a trip on the Schwebebahn is worth the short trip out into the Wupper Valley.