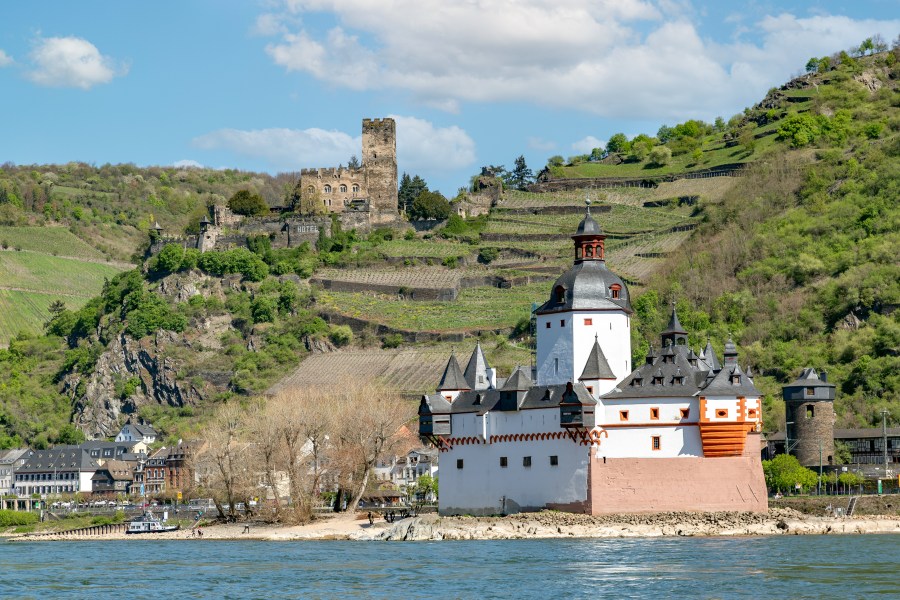 The Middle-Rhine valley is known for its spectacular castle-filled vistas. However, most of what you see are actually restored 19th century interpretations of castles. Some are better than others, but all of them look quite epic from a distance. So the question is which castles are worth visiting, and which are best viewed from a cruise ship? This guide will take you through the medieval castles, early modern fortresses and ruins that I think are worth getting off the boat for.

Here is my list of castles in the order which I find them most interesting to visit, but there might be circumstances in which one should be rated higher, so take the order with a healthy dose of salt:

The Marksburg was a minor holding of the Kazenelnbogen and later Hesse-Rheinfels Dynasties. Becaues Rheinfels withstood the French it was never destroyed. It remains one of the best examples of Romanesque castle construction in Europe.

Architectural Note: The Marksburg’s triangular layout was typical of the castles built during the reign of the Staufen Emperors, roughly 1150-1250, though most of the upper structure dates from later periods. Only the cylindrical portion of the main keep is from the 19th century however. It is also the only castle on the Rhine with preserved interiors from the Middle-Ages, and is comparable to the Castle Eltz in its overall level of preservation.

Ehrenbreitstein is an early 19th century Prussian fortification built on the ruins of an older castle blown up by Napoleon. Its one of the best preserved fortresses of its type in Europe.

Rheinfels was the capital of the Hessen-Rheinfels county and was built out into a massive star-fort, the largest between Bonn and Mainz. It resisted Louis XIV but fell to Napoleon. Its ruins are quite extensive.

Travel Note: The fort ruins are far more extensive than meets the eye from the river. However, most of the ruins are accessible only by guided tour, and it is definitely worth the effort to see.

The island castle was never permanently inhabited, it was more of a fortified toll-booth. Originally, it would have supported chains across the river, to ensure the river traffic paid the toll.

Travel Note: To reach the castle you have to take a ferry. During the summer months it has a dedicated boat, but during the winter you will have to ask the car ferry to make a dedicated stop for you.

Walls of Bacharach and Burg Stahleck

The castle is a hostel and does not have any preserved interiors. However, both the castle and the towers of the city walls offer some of the most iconic views of the Rhine Valley.

The castle is a hotel and may not be accessible if the restaurant is closed. Instead walk along parts of the city wall and enjoy the views of the town and the valley.

The Electors of Trier built a series of castles to control land under their direct control. This castle has some preserved interiors, a small museum and a unique set of Gothic frescoes.

Travel Note: The Landesburg is divided into several museum areas dedicated to different parts of Boppard’s history. Other than a few ceilings and the rooms in the tower, nothing of the interior has been preserved. However, you do get nice views from the tower.

This is a very small castle ruin, but one that escaped the 19th century “reconstructions”. Special here is that it wasn’t destroyed by the French, but during a siege in the 30 Years War, and bullet marks are still visible.

Castle Maus is a lightly “renovated” ruin that preserved much of the original exterior. Noteworthy here are the views of the valley.

Like its fellow lowland castles in Boppard, Kaub and Lahnstein, it escaped destruction by not being strategically relevant. Not much on the interior survives but it has some interesting museums.