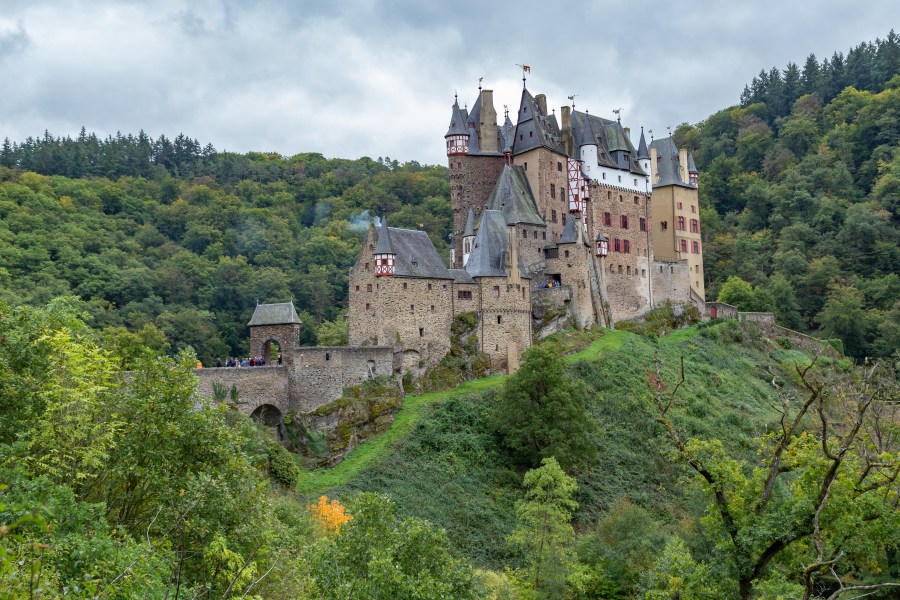 Contents hide
1 Stage One: Castles of the Mosel
1.1 The Fortress in Koblenz
1.2 The Castles of Kobern-Gondorf
1.3 Castle Thurant – Alken
1.4 Castle Ehrenburg
1.5 Castle Eltz
1.6 Castle Pyrmont
1.7 The Imperial Castle of Cochem
1.8 Castle Balduinseck
2 Stage 2: The Castles of the Eifel
2.1 The Genovevaburg (Mayen)
2.2 The Palace of Bürresheim
2.3 Nürburg Castle
2.4 The Kasselburg
2.5 The Castle at Manderscheid
3 Stage 3: Castles of the Ahr
4 The Walled City of Bad Neuenahr-Ahrweiler
4.1 The Are Castle
5 Return to the Mosel-Valley
5.1 Mosel Valley

The castles of the Mosel and Eifel have a different charm than the those of the more famous Middle Rhine valley. Whereas those of the Rhine Valley were reconstructed to the whims of eccentric nobility of the Victorian Age, most Mosel and Eifel castles remained ruins or were only partially reconstructed. As a result, the medieval architectural heritage is more evident. However, with so many ruins, many of them have hardly more than an outline on the ground. Knowing which ones to visit is an impossible task, but here I describe the ones I feel most worthy of a visit.

Stage One: Castles of the Mosel

The Mosel castles are the most accessible for those without a car, so the suggestions are based on accessibility by train. For this reason we start in Koblenz and use it as a base for multiple trips. Most of the castles can be visited with only a short walk, though for some this trip may require more time investment. In general not more than two castles per day are feasible. Castle Balduinseck is fairly remote, so it I marked it optional.

The Fortress in Koblenz

The fortress high above the city is the best preserved 19th century fortress in Germany. The massive scale can only really be appreciated in person.

The castles of Kobern are located dramatically on rocky spires visible from a great distance. The Upper castle protects the mysterious Templar Chapel.

The two towers reflect two owners, Cologne and Trier, who split the castle in half. Located on a dramatic bend of the Mosel River.

Perhaps the most technically interesting ruin. Retains both its high keep and a unique vaulted spiral entrance ramp with internal passages for defenders.

One of Germany’s premier castles, and not without reason. Still owned by the family who built it in the 13th century, it has the best preserved interiors of any medieval castle in Germany.

A ruin with many dramatic angles, located further up the same river valley from Castle Eltz.

The castle once protected the briefly independent free city of Cochem but remained a ruin until reconstructed in the 19th century.

Located deeper into the Hunsrück mountains, Balduinseck is a well preserved square-keep in a low valley giving dramatic view from various angles.

Stage 2: The Castles of the Eifel

These castles are fairly remote and even the most popular castles, the Nürburg (the famous Nürburg Ring travels around it) and the Bürresheim Palace are difficult to reach. I suspect that most of these castles will require entire-day investments to experience.

Mayen was partially destroyed in WW2, but the castle was largely spared. Located on a small hill above the city it offers nice views of the somewhat uninteresting cityscape of Mayen.

Bürresheim Palace is a hidden gem, offering a similar experience to castle Elz without the hordes of tourists. With fully preserved interiors and dramatic views from the surrounding hills, its a highlight of any trip.

One of the more interesting castle ruins. It was reconstructed in the 19th century to be “historically accurate” rather than a palace. (5) Image Source

A truly remote castle in the Eifel, offers some of the most epic castle views in Germany.

The Castle at Manderscheid

A spectacular series of ruins hidden deep in the Eifel. The surrounding village is less interesting, however.

Stage 3: Castles of the Ahr

The Ahr river valley belongs more the North Rhine Cultural area and is not directly accessible from the Eifel. The towns and castles here are not as substantial but retain a lot of old-world charm.

The Walled City of Bad Neuenahr-Ahrweiler

The town of Neuenahr is full of old-world charm and has enough surviving medieval wall to consider it “walled”.

Located a little further up the Ahr river, the ruins have dramatic views of the surrounding landscape

One thought on “The Best Castles of the Mosel”