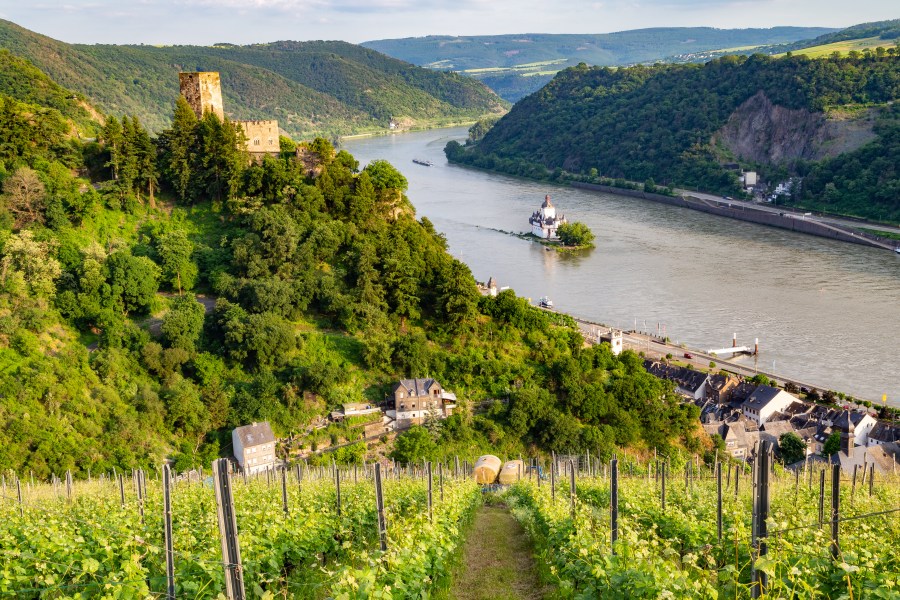 With so many villages to choose from, this guide will help narrow the list down. These places will all appear on the most common lists of destinations associated with the Middle-Rhine. However, since this is a traditional destination for the romantics in all of us, I figured it would be appropriate to list the best places to visit for a glass of Riesling on a warm late summers evening.

The following list of towns in a general order of my personal preference based on how nice I thought it was:

Linz is probably a surprising result for a town so far away from the main tourist areas, but it has without doubt the largest and most preserved old town on the Middle-Rhine. It would be my first choice for a weekend stop.

Architectural Note: Linz has one of the most spectacular churches in the valley. St. Martin is an example of the Middle-Rhenish Romanesque gallery church type with heavy influence from the Lower-Rhine region. It also has some of the most complete fresco cycles in the valley as well.

Bacharach is probably one of the most well known stops on the Rhine, famous for its romantic view of the River and the ruined church. It has been a favorite since the beginning of tourism in the 19th century.

An old castle town of Mainz, Eltville sits at the heart of wine country and has an old town full of local wine-bars and whine-wholesalers. It features many cozy streets and medieval alleyways. Be sure to try the original Eltville Rose Cake.

Eberbach Monastery is among the most best preserved medieval monasteries surviving in Germany. Easily Reached from Eltville, you can explore the dark passages of the monastic complex while enjoying some of the wine they produce.

Architectural Note: The church tower in Eltville is fairly unique, one of only a handful examples produced by the Frankfurt Cathedral Bauhütte or construction company basically. The town also has a few immaculate late Gothic residences including the original urban curtain wall, which makes for a unique cityscape.

Koblenz is a city with a full day of activities from the old-town to the fortress of Ehrenbreitstein to the many medieval churches. Though most of the city was destroyed in WWII, the surviving parts are comparable to any village on the Rhine.

St. Goar is a charming village that sits below the ruined fortress of Rheinfels. The small old town is full of alleyways and the medieval church is full of Gothic frescoes. This town has everything you expect in a German village.

Oberwesel has a charming old-town and a storied history as a Free City of the Empire. Take a walk along the city walls and enjoy the views.

Architectural Note: The Church of our Lady is one of the most unique examples of Gothic architecture in Germany. Started in the first half of the 14th century, the high Gothic construction has one of the best preserved rood screens and its original medieval altar. Moreover, the style reflects a combination of a traditional French style with the austere traditions of the mendicant orders (and a limited budged most likely).

Though its often advertised as having Roman ruins, these are not terribly impressive. Better is the charming old town of Boppard in general, the castle and the ancient Romanesque church of St. Severus.

Andernach has an impressive collection of streets full of Renaissance, Baroque and Historcist architecture. Not to mention the mighty Romanesque and Gothic churches. It also has the only surviving baroque church in the region.

Erpel is a tiny village that nevertheless far outshines its larger counterpart Remagen across the River. Almost entirely composed of Baroque era half-timbered houses its surprisingly immersive, even if its just one street.

Like Erpel, Unkel is basically just one street filled with a rich collection of baroque half-timbered houses.